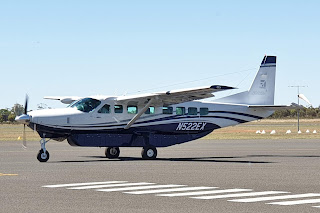 After taking on fuel, N522EX departed Charleville Airport and continued north to Cairns where it appears to be staying for the night.

The nice new Caravan appears to possibly have been on a demonstration tour with it originally arriving into Australia via Darwin in mid-September. It has since spent time operating out of Essendon as well as heading over to New Zealand for a tour during the latter part of the month. It appears that N522EX has spent all of October and this month then parked back at Essendon.