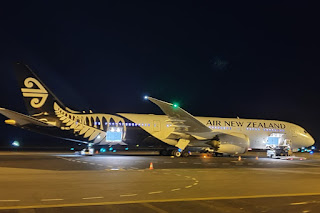 The Dreamliner positioned across the ditch from Auckland empty as ANZ6001.  It was then loaded with a full flight of personnel and their bags before it later departed Rockhampton Airport direct to Singapore's Changi Airport as ANZ1941.

It is expected that ZK-NZI will then return to Rockhampton Airport during the afternoon on Tuesday 5 November and complete another flight to Singapore.

It should also be joined at Rocky by a Royal Brunei Boeing B787-8 Dreamliner which will also complete a passenger charter flight from Rockhampton Airport to Singapore.  This should wrap up the third and final 'wave' of troop charter flights for this year's instalment of Exercise Wallaby 2019.