Local Embraer EMB-550 Legacy 500 Bizjet N142GZ Back in The Air out of Mackay Airport - Plus More!

After spending a month tucked away in its hangar at Mackay Airport, early on Thursday 31 October, the locally-based Embraer EMB-550 Legacy 500 bizjet N142GZ was back in the air, noted departing Mackay Airport for the Sunshine Coast and Sydney. 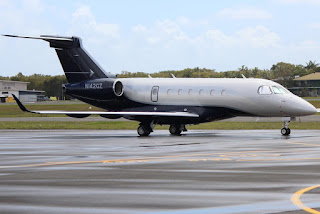 Then, on Saturday 2 November, N142GZ was photographed (above) soon after arriving back into the Sunshine Coast.

At the time of writing, N142GZ appears to be staying on the Sunny Coast for another night.

Meanwhile, also on Saturday 2 November, LifeFlight (Aeromed) LearJet 45 bizjet VH-VVI "Ambulance 451" was noted also visiting Mackay Airport.  It arrived from Townsville and later departed to Brisbane on what appeared to be a medical evacuation flight before it then returned to its Townsville base.

Sincere thanks to the Sunshine Coast Plane Spotting Facebook page for allowing us to share their great photo of N142GZ!
Posted by Damian F at 5:06 PM