The third and final 'wave' of heavy jet charter flights at Rockhampton Airport in support of the Singapore Armed Force's Exercise Wallaby 2019 wrapped up on Tuesday 5 November with the final two departures transporting personnel and equipment home to Singapore. 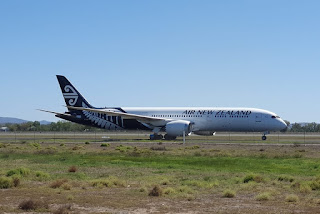 As predicted, Air New Zealand Boeing B787-9 Dreamliner ZK-NZI returned to Rockhampton Airport, positioning from Singapore's Changi Airport empty as ANZ6002.  As night fell, it was then loaded with a full flight of personnel and their bags before it later departed Rocky and flew back direct to Changi but as ANZ1943.

Of interest, ZK-NZI has since positioned back to Auckland direct from Singapore but as ANZ6006.

Then, a little later on Tuesday 5 November, Royal Brunei Airlines Boeing B787-8 Dreamliner V8-DLD arrived into Rockhampton Airport, positioning direct from Brunei as RBA4271.  It too was loaded with a full flight of personnel and their bags and it then also departed direct to Changi but as RBA4272. 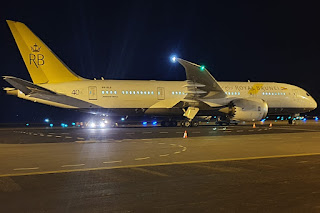 These flights see the end of heavy jet passenger charter flights in support of this year's Exercise.  All up, there were three 'waves' of nine aircraft by the Air New Zealand and Royal Brunei Airlines Dreamliners.

Finally, it has also been reported that the Volga Dnepr Antonov AN-124 RA-82044 will return to Rockhampton twice over the early part of next week.  It has been parked at Cairns since arriving there from Rockhampton Airport in September.

The four RSAF Boeing CH-47D Chinook helicopters should also return 'home' to Oakey this week as the RSAF flying operations around Rockhampton Airport slowly come to an end once again for another year.

Sincere thanks to local plane spotter Margaret W for taking the time to capture and send through these great photos!

All photos taken by Margaret Winn  ©
Posted by Damian F at 8:24 AM