Certainly an interesting arrival into the Whitsunday Airport at Shute Harbour this week with Wollongong-registered Cessna 208 Caravan VH-NMV arriving direct from Tyagarah on Sunday 24 November to take up operations for the locally-based Skydive Airlie Beach. 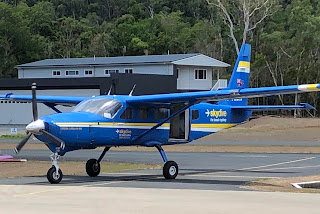 It appears to have replaced its sistership - fellow Cessna 208 Caravan VH-DNK - which flew North to Cairns also on Sunday 24 November and looks to be operating between there and Tully.

UPDATE!  On Tuesday 3 December, another Cessna 208 Caravan of the same company, VH-BCR, flew North to Tully from Tyagarah via Mackay Airport.  Consequently, VH-DNK returned to the Whitsunday Airport at Shute Harbour.  And on Wednesday 4 December, VH-NMV returned South direct to Tyagarah.

Meanwhile, noted arriving into the Whitsunday Airport at Shute Harbour from the South via Rockhampton Airport on Saturday 30 November was Skyline Aviation Group Beech B200 King Air VH-NGL.


It is believed that this aircraft is utilised by Red Bull Air Race World Champion, Aussie Matt Hall.

UPDATE!  After enjoying a weekend in the beautiful Whitsundays, Matt Hall piloted VH-NGL out of the Whitsunday Airport at Shute Harbour on Monday 2 December, calling back into Rockhampton Airport before it then continued South.

Finally, Brisbane-based Bishopp Aviation SOCATA TBM-700 VH-VSV was noted arriving into Proserpine (Whitsunday Coast) Airport from its Archerfield base on Friday 29 November.  It returned to Archerfield early on Saturday 30 November.

Photo taken by Lee Holloway  ©
Posted by Damian F at 8:50 AM