A surprise arrival into Mackay Airport on Thursday 28 November with Royal Australian Air Force (RAAF) Boeing B737-7DF(BBJ) A36-002 spotted touching down from Canberra and the Gold Coast as "Envoy 22". 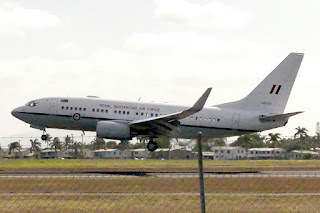 After a short while on the ground, A36-002 looked to depart Mackay Airport and return to Canberra.

Meanwhile, the two RAAF Beech B350 Super King Air turboprop aircraft that have flown over and into various Central Queensland Airports this week were back in the region again on Thursday 28 November.  A32-008 "Torch 29" flew up from Sunshine Coast and completed low level airwork off the coast near Bowen before landing at Hamilton Island Airport.

While A32-988 "Torch 24" also flew up from the Sunshine Coast and completed low level airwork off Hay Point and then around the Brampton Island area before also landing at Hamilton Island Airport.

Later, the two Super King Airs flew back South separately, with A32-988 completing training diversions left and right of its flight track before it then completed airwork at Bundaberg Airport.  Both Super King Airs returned to the Sunshine Coast.