During my week in the Whitsundays, I also called into the Whitsunday Airport at Shute Harbour / Airlie Beach.  While only being the home of light General Aviation (GA) aircraft and helicopters, I feel they still make for some interesting reporting. 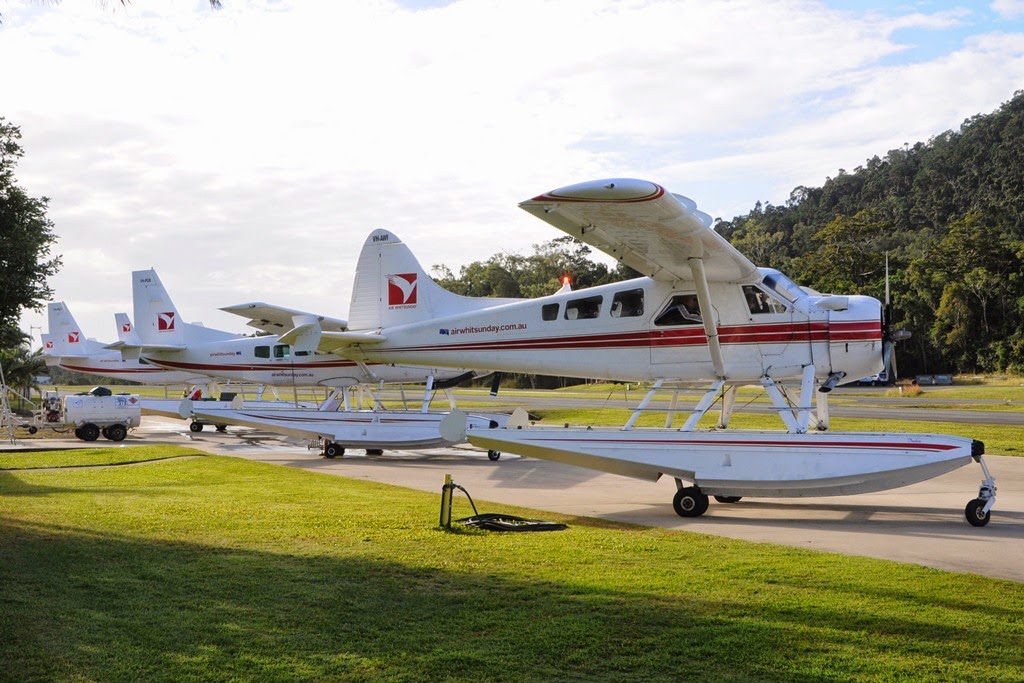 There are two major operators at the Airport - GSL Aviation and Air Whitsunday Seaplanes.  Both operate transfer flights to the nearby Whitsunday islands, as well as several sight-seeing and other tourist flights over the beautiful Whitsundays.

I ventured to the Whitsunday Airport about lunch time on Thursday 3 July, just after a heavy rain-shower had passed through, and captured several aircraft belonging to one of these operators - GSL Aviation. 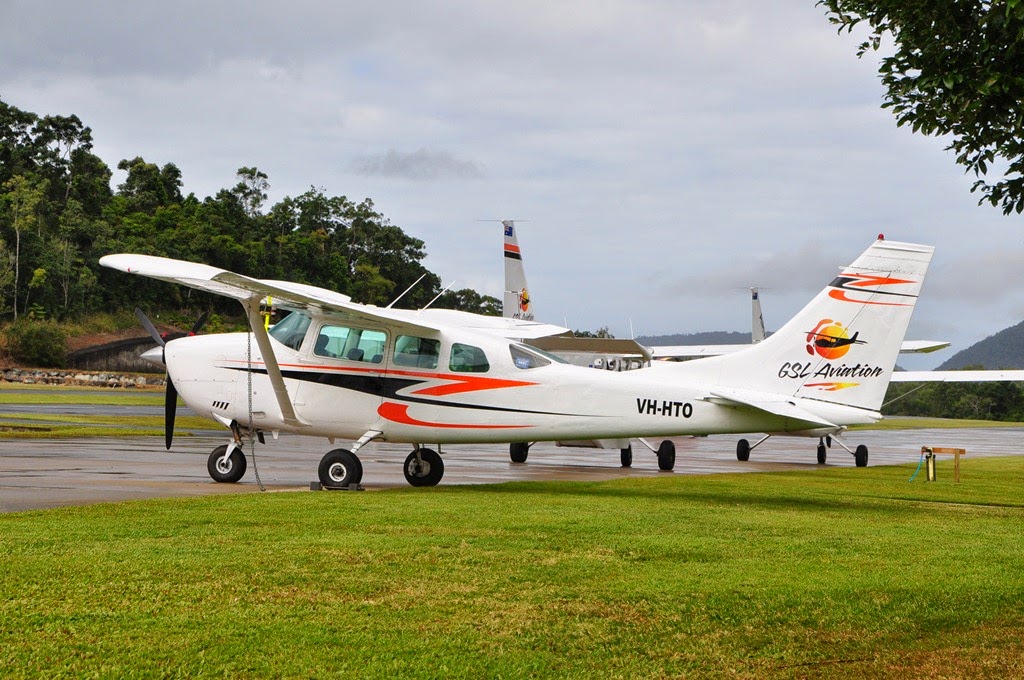 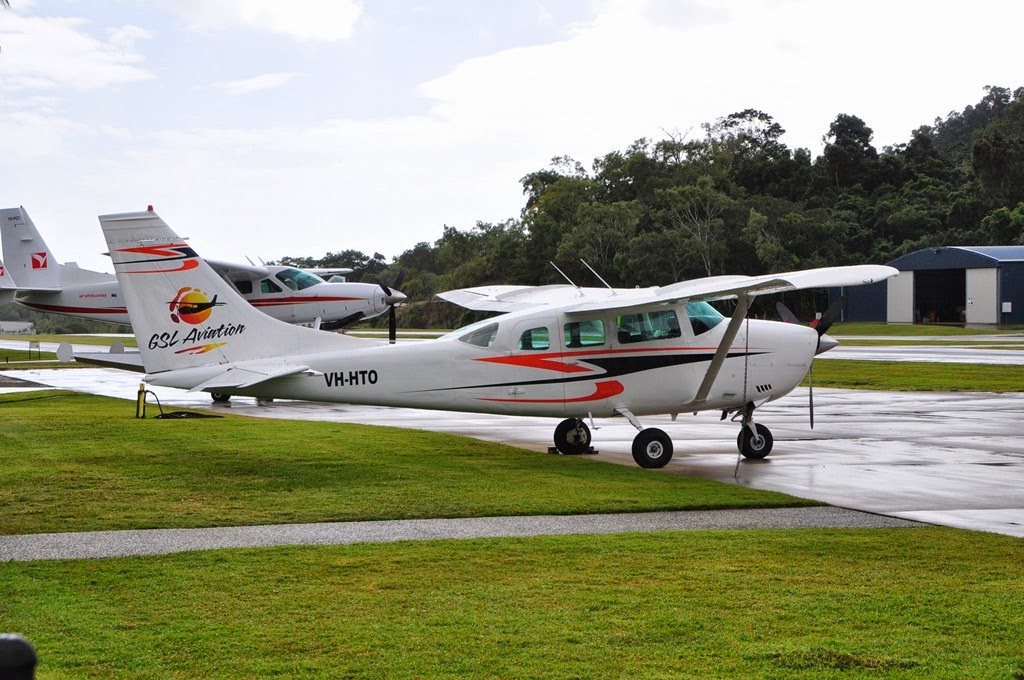 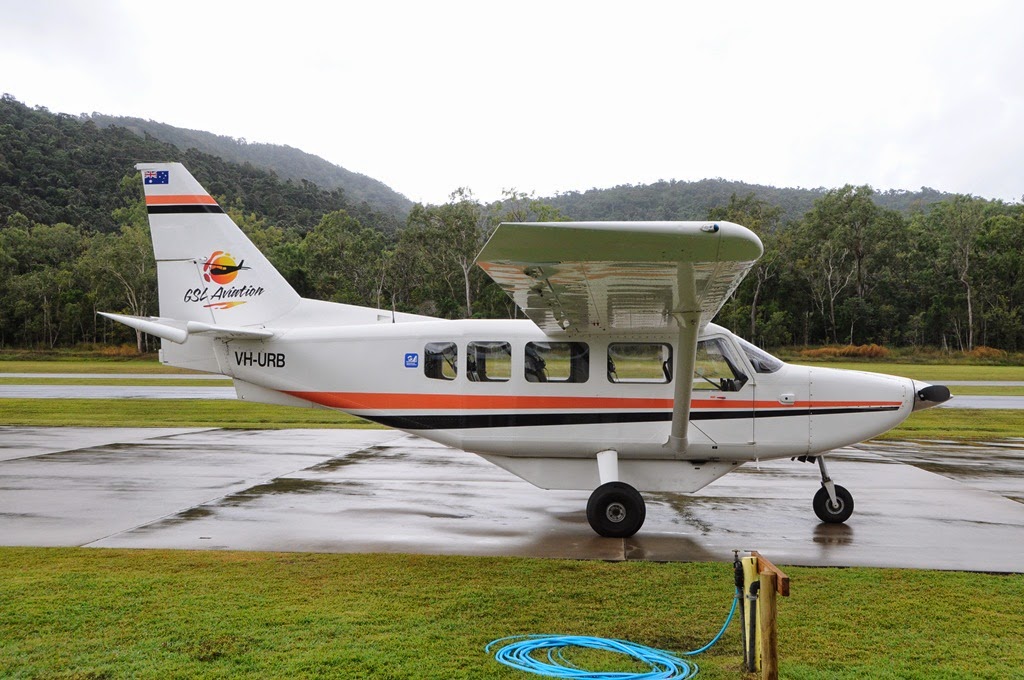 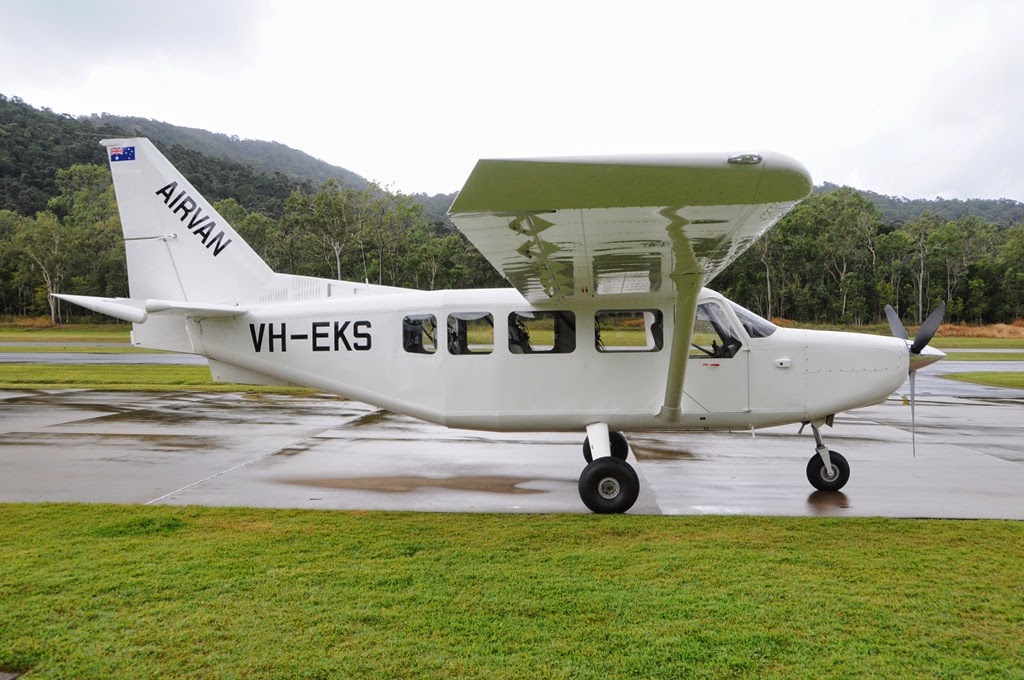 During the afternoon of Thursday 3 July, I popped back to the Whitsunday Airport - making sure I grabbed a coffee at the resident 'Beaver Bar' Cafe - and it was a great coffee too!  As the afternoon wore on, three of Air Whitsunday's fleet of seaplanes landed at the Airport after completing their various sight seeing and tourist operations for the day. 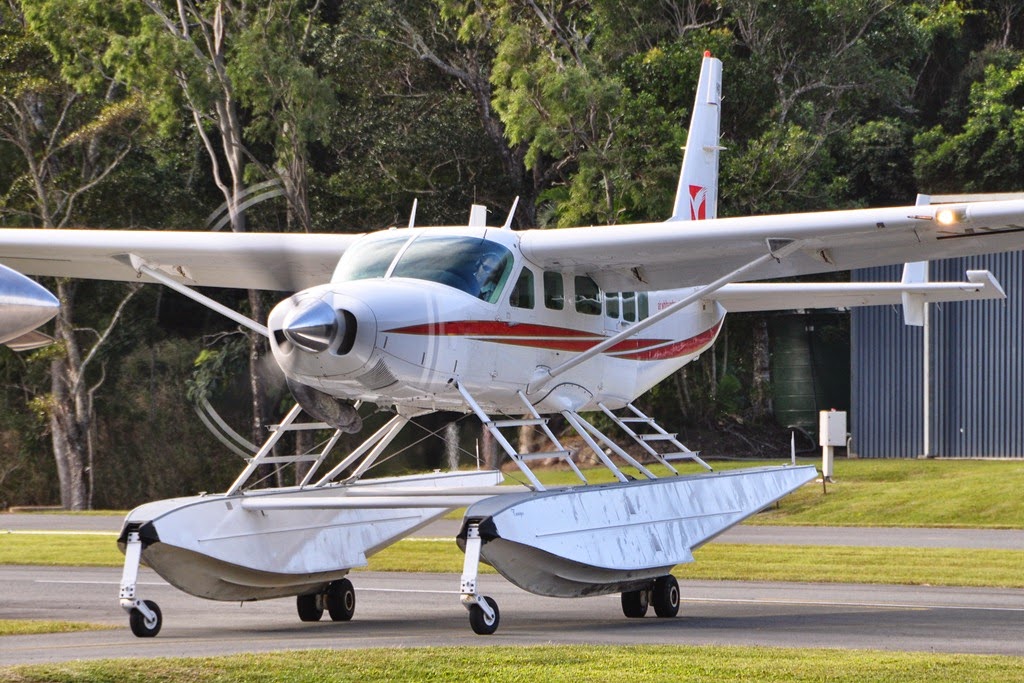 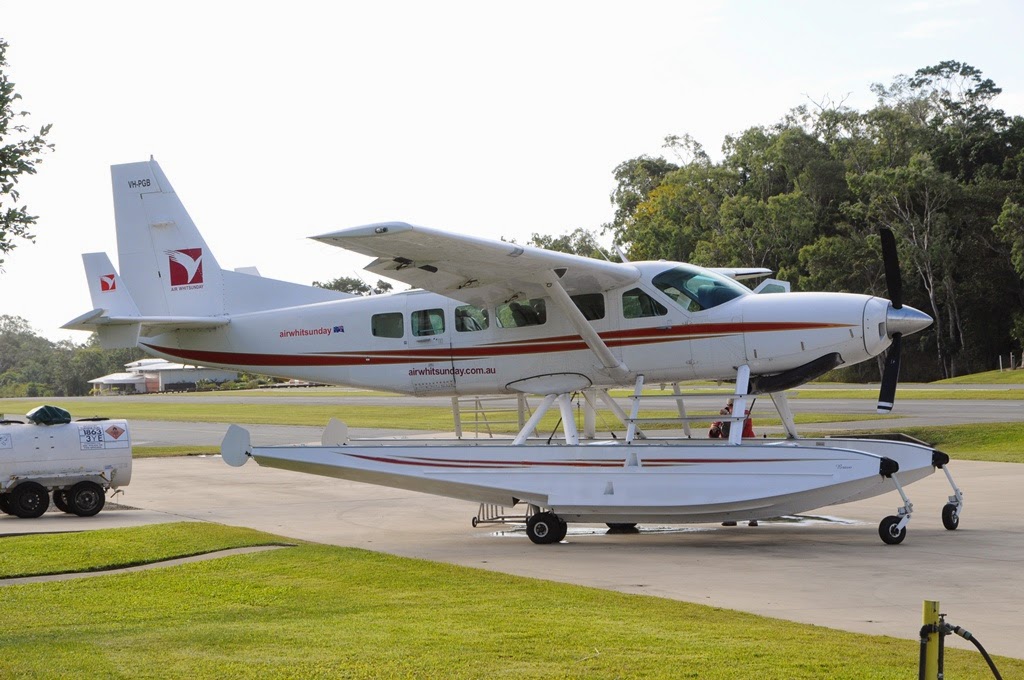 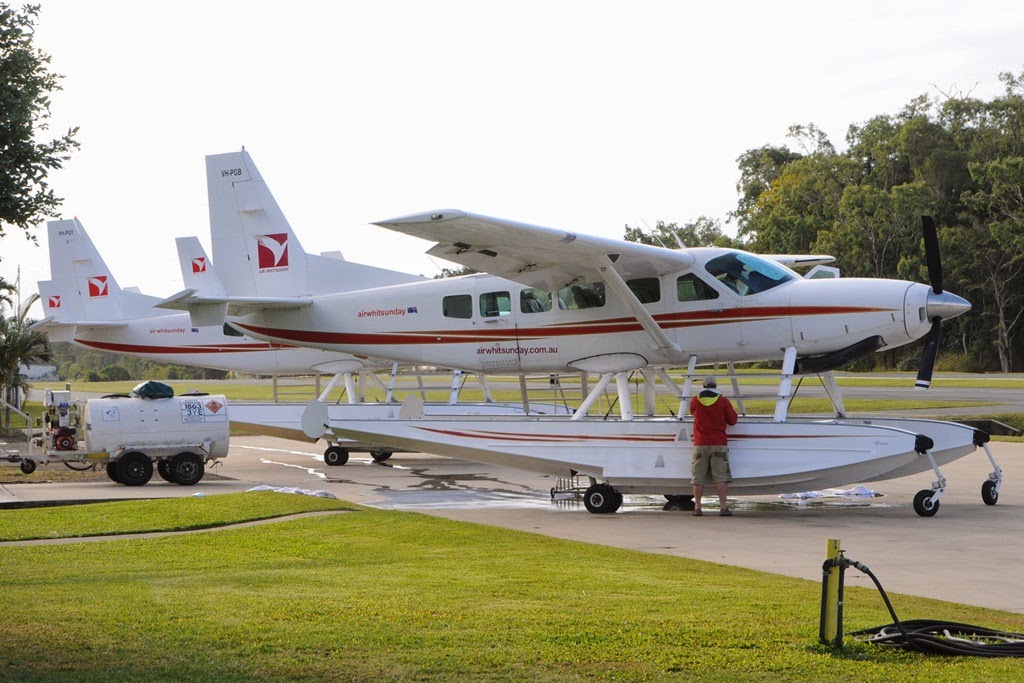 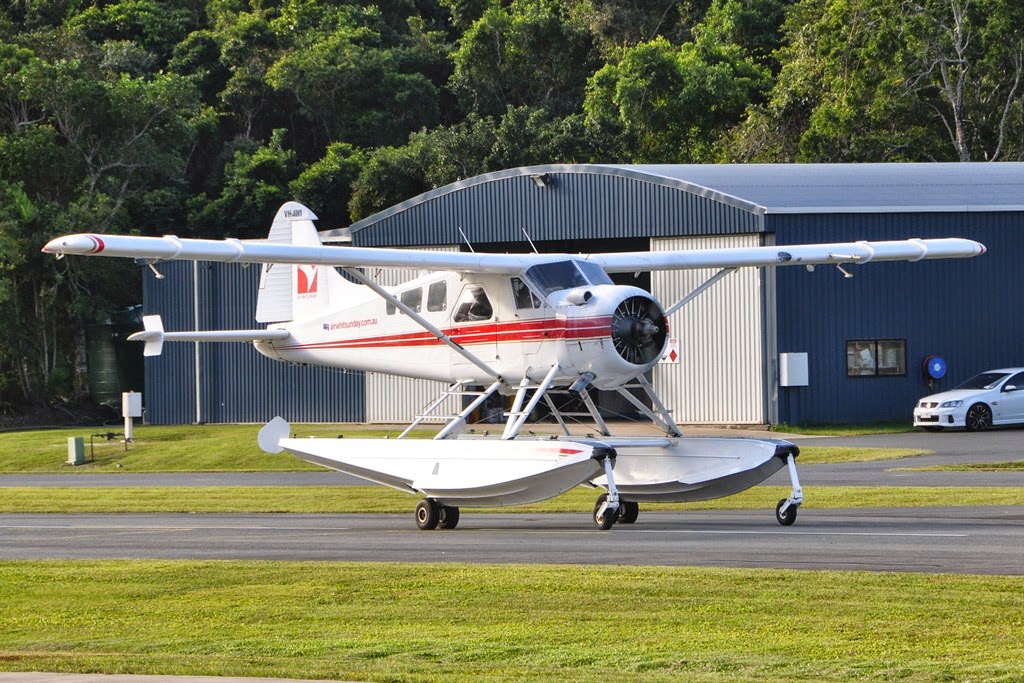 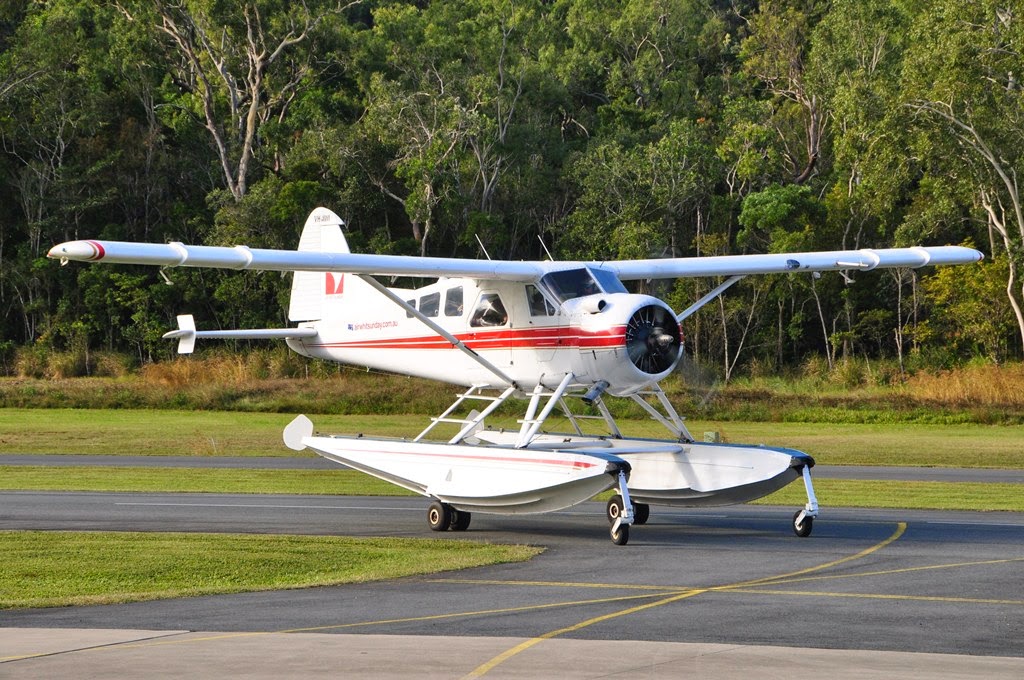 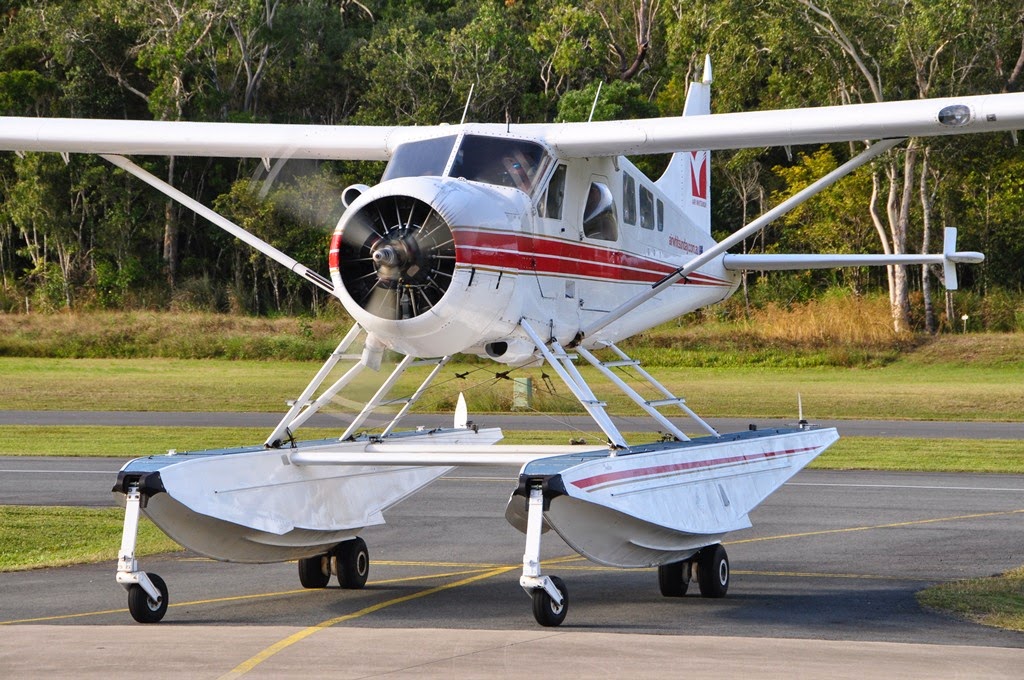 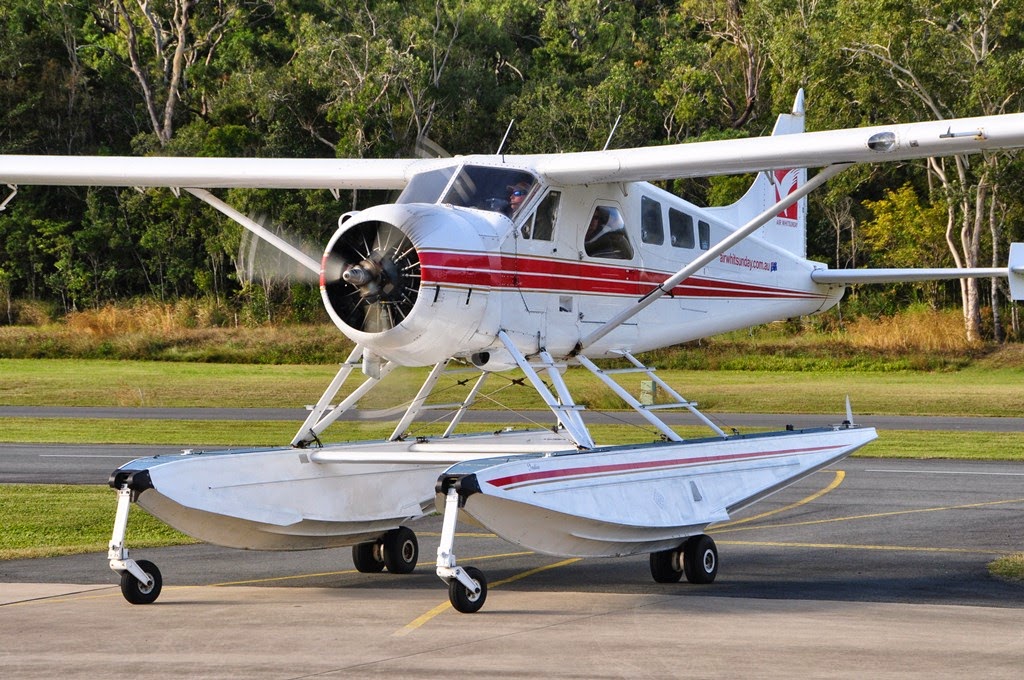 It joined the two caravans on the parking apron, making for a beautiful sight in the late afternoon sun!

A new operator at the Whitsunday Airport is the recently launched North Queensland Heli Taxi.  Their Robinson R66 VH-VRN was spotted resting in between the lunch-time rain showers. 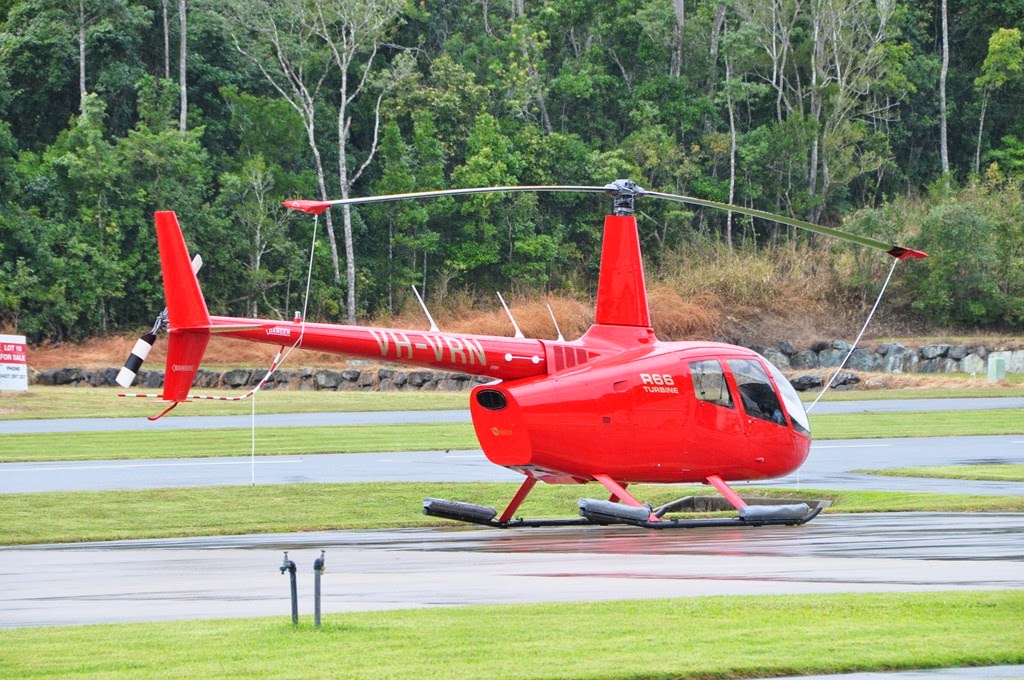 North Queensland Heli Taxi provides helicopter taxi, tour, and air work services based in the Proserpine and Airlie Beach area.  This includes transit 'Heli Taxi' flights on request from travellers, from the Whitsunday Airport to and from:  Proserpine / Whitsunday Coast Airport, Bowen, Collinsville, Abbot Point, Montes, and the islands (only exclusions being Hamilton and Hayman Islands).  North Queensland Heli Taxi also provides tours to the Great Barrier Reef to view Heart, Hardy and Hook reefs as well as Whitehaven Beach and other unique destinations around the Whitsunday and Bowen Basin regions. 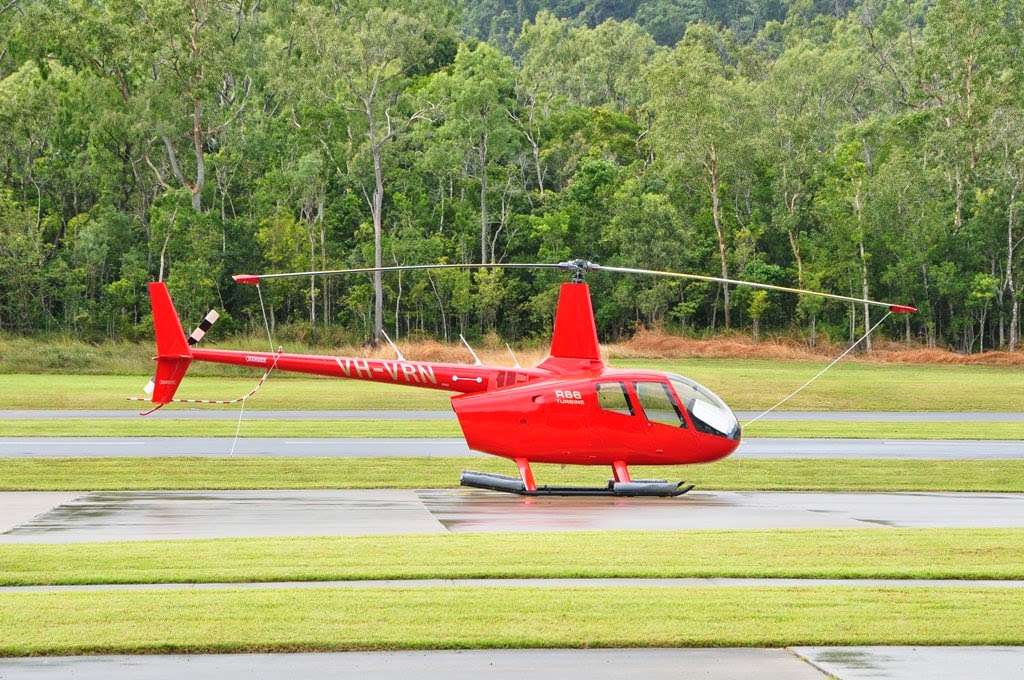 While I was taking the above photos of VH-VRN, Warbirds over Whitsundays beautiful 1977 Chinese-built Nanchang CJ-6 warbird VH-WOA was towed past. 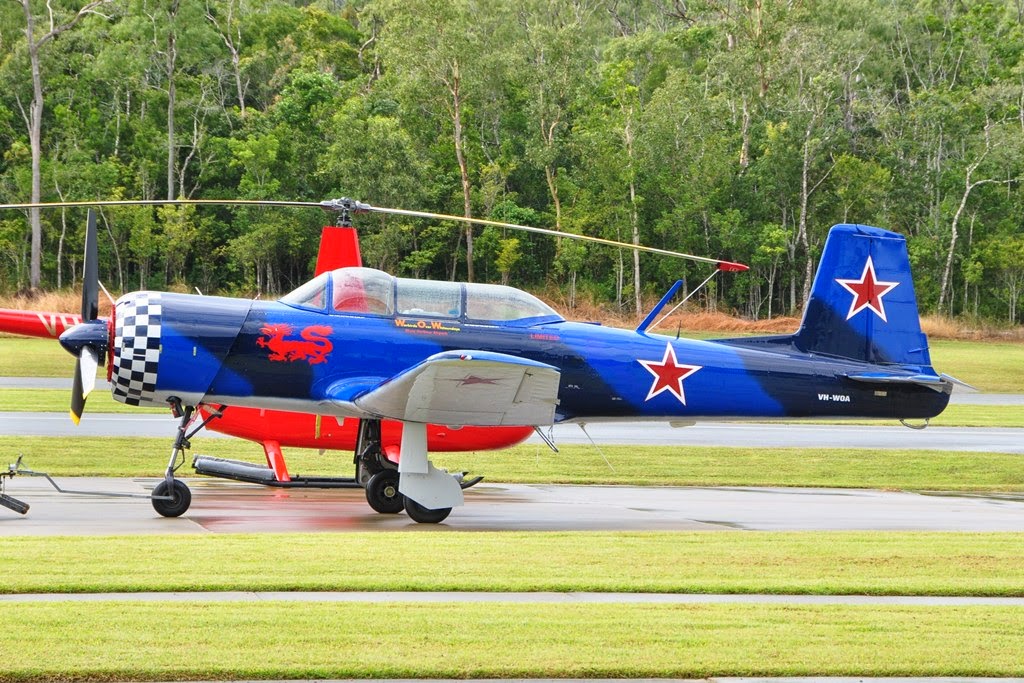 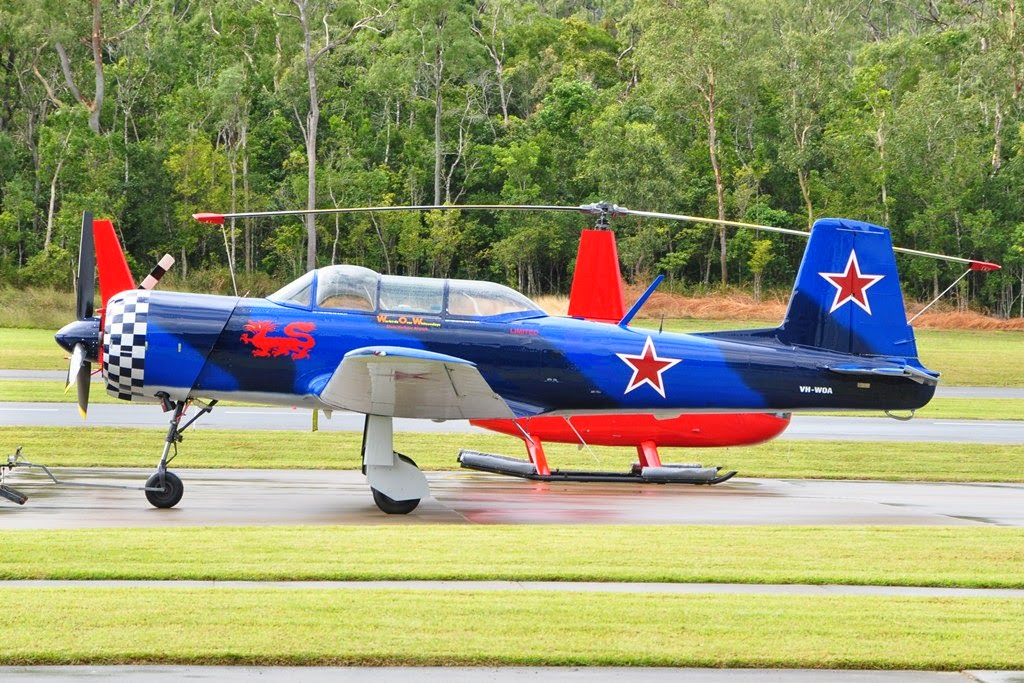 I spotted the Nanchang in the skies over Airlie Beach on Tuesday 1 July shortly after it arrived from the South.  Local plane spotter Kayanne H photographed VH-WOA as it refuelled at Rockhampton Airport on Tuesday on its journey North to the Whitsunday Airport. 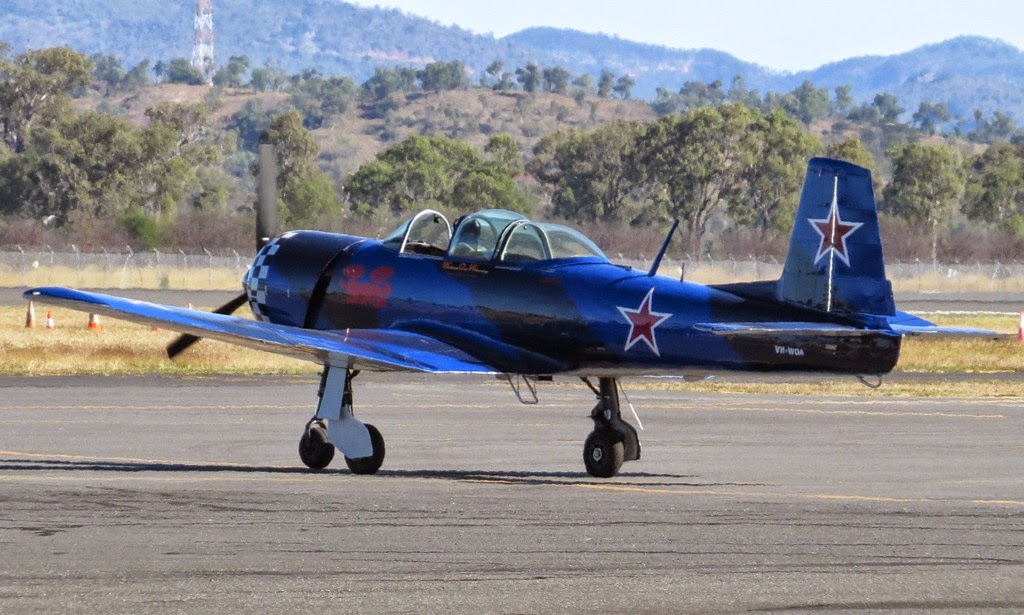 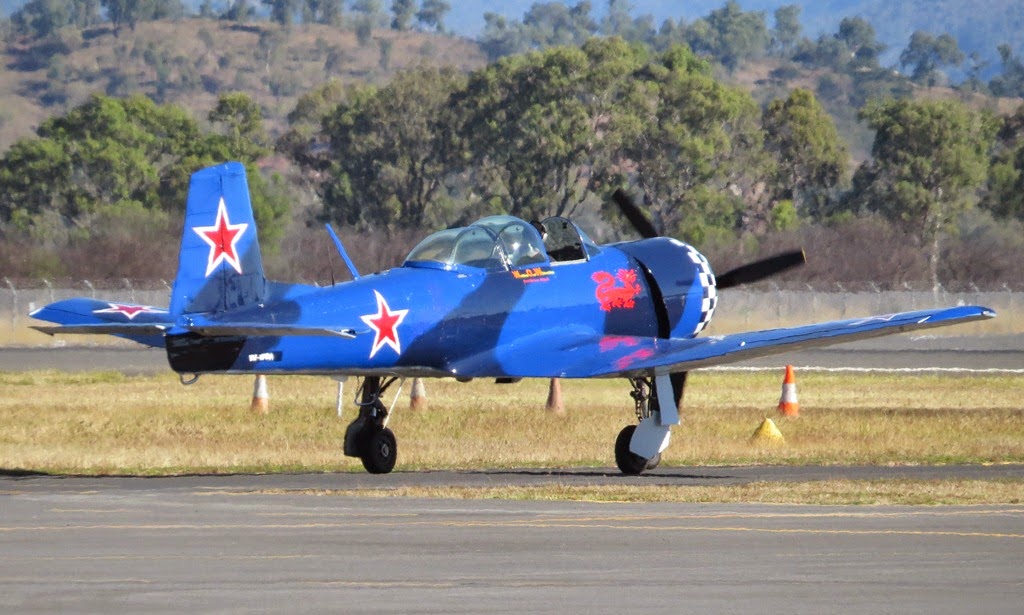 Having one of their bases at the Whitsunday Airport is Heli-Biz - one of the nation's best known helicopter sales and training providers for the last 25 years.  Heli-Biz is Australia's authorised seller and service provider of Robinson helicopters, and as I was enjoying my coffee late on Thursday afternoon, Robinson R44 II VH-DCN was conducting what appeared to be a training flight at the Airport. 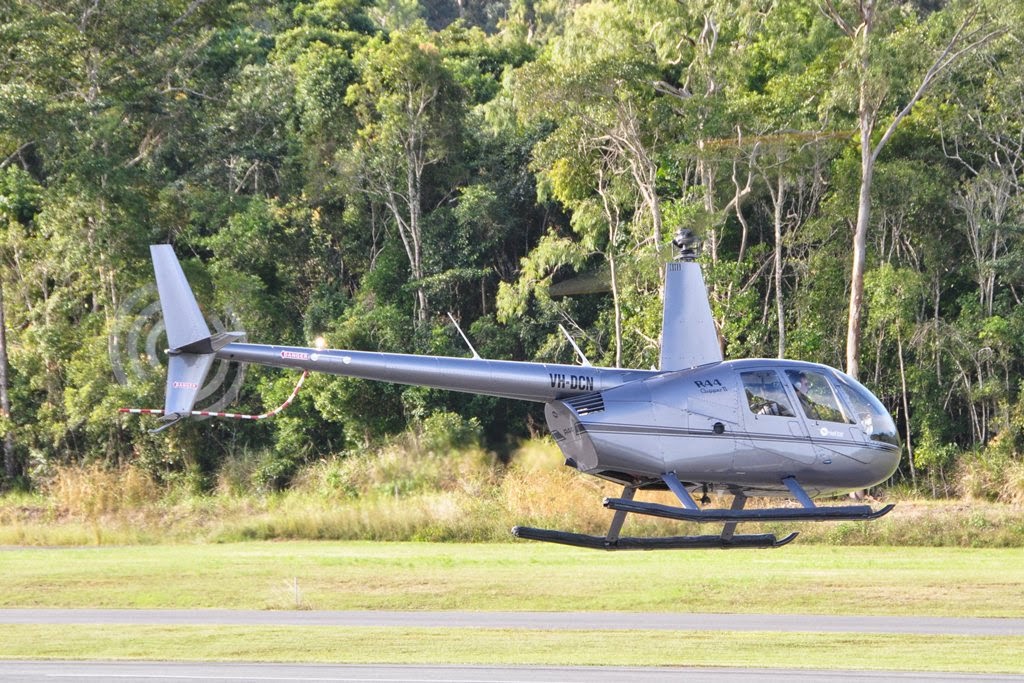 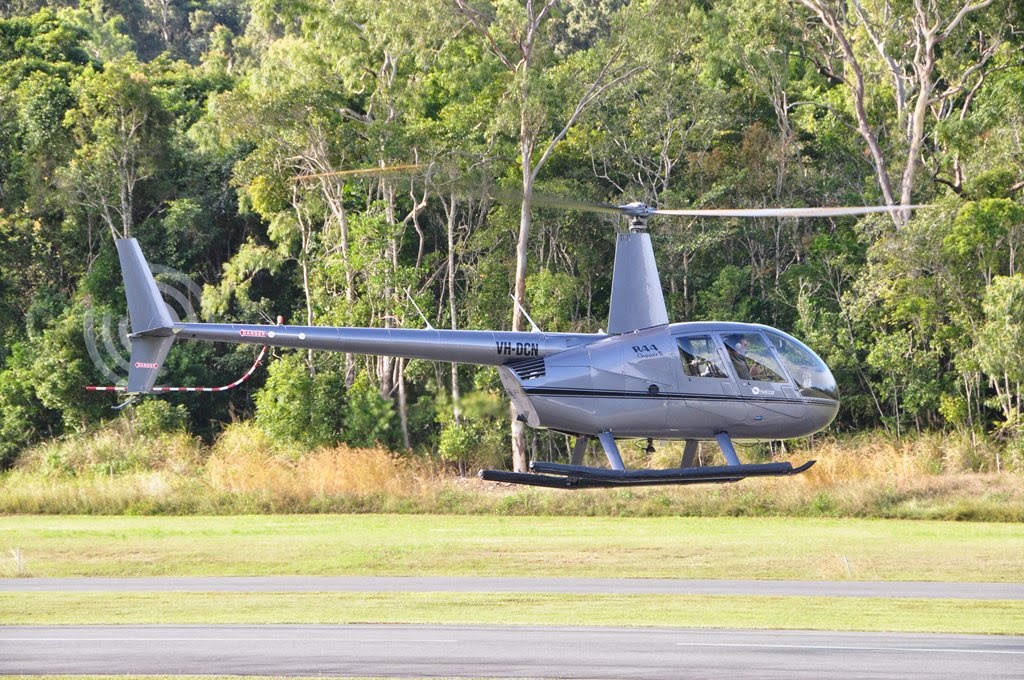 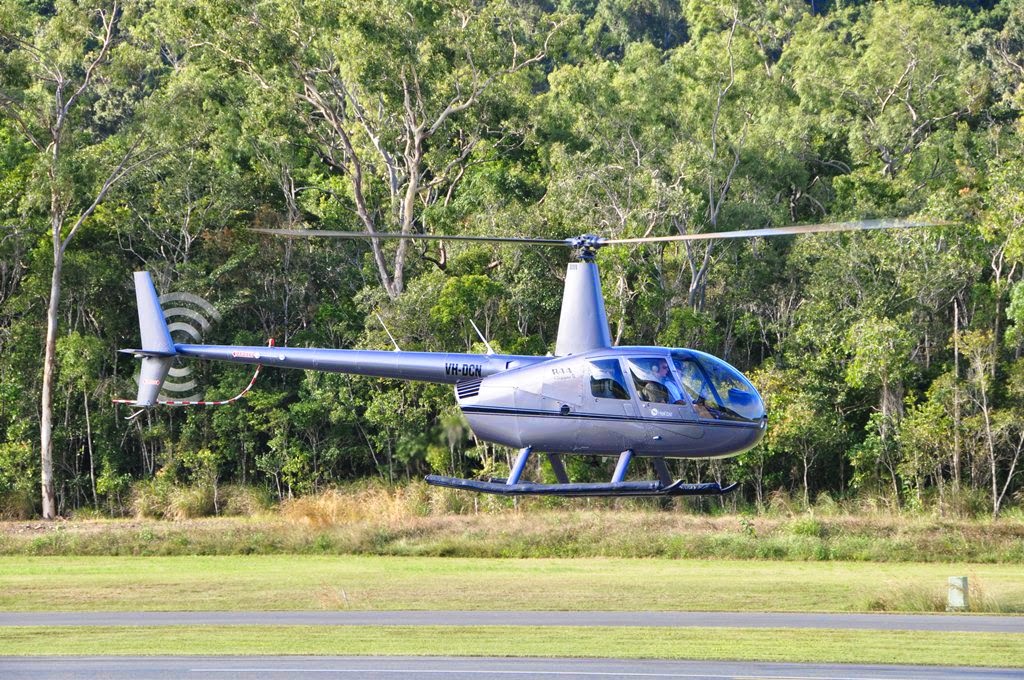 In all, it was a really enjoyable week in the Whitsundays - and while I didn't get much plane spotting time, I did thoroughly enjoy the time I did get to spend at Mackay, Proserpine and the Whitsunday Airports.
Posted by Damian F at 7:37 AM