After almost 32 years in service, Air New Zealand has recently operated its final service with the Boeing B767 widebody jet.  The final flight from Sydney to Auckland was operated by their sole remaining B767-300(ER) in the fleet - ZK-NCI. 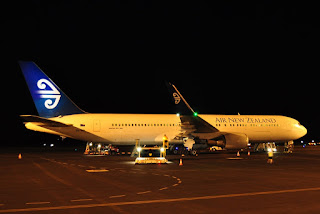 
Air New Zealand has been progressively replacing its B767s with Boeing B787-9s, which feature the airline’s latest cabin products and offer lower operating costs and improved fuel efficiency while carrying more passengers.  This 'changing of the guard' was clearly evident in 2016 when the sleek B787-9 aircraft operated several charter flights into Rockhampton Airport during Exercise Wallaby.


Air New Zealand presently operates nine B787-9s, with a further four due for delivery between now and the end of 2018.

In Australia, Qantas also farewelled the Boeing B767 in December 2014 after a 29-year career operating 927,000 flights that carried nearly 168 million passengers.
Posted by Damian F at 8:05 PM