Another bizjet doing the rounds on Monday 22 May was the Queensland Police Service (Airwing) Cessna 560 Citation Ultra Bizjet VH-PSU which was spotted at Maryborough Airport. 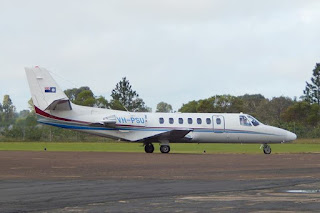 It arrived from Brisbane it departed a short time later to Rockhampton Airport.

After spending a short while on the ground in Rocky, VH-PSU returned to Brisbane.