On Friday 26 May, seven Pilatus PC-9/A's of  the Royal Australian Air Force (RAAF) elite formation aerobatic display team - The Roulettes - were photographed soon after arriving into Rockhampton Airport from RAAF Base Amberley. 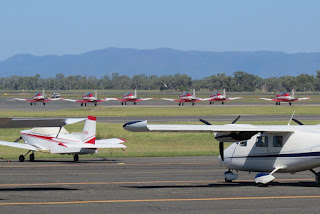 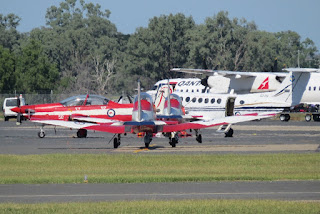 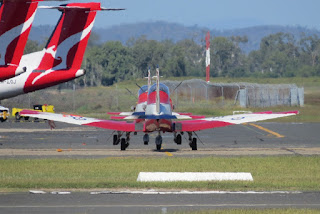 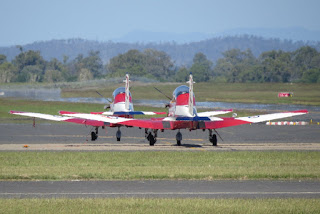 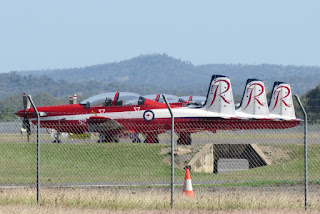 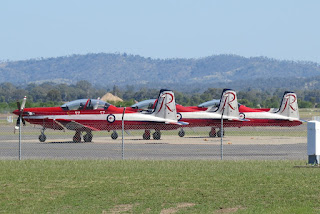 The Roulettes' primary role is to showcase the flying skills of the RAAF to the Australian public through aerobatic displays at major events and airshows.  After spending the night at Rockhampton Airport, six of the seven aircraft were expected to put on a display at the Old Station Fly-in and Heritage Show at Raglan on Saturday 27 May.

The team members of the Roulettes are flying instructors at the RAAF's Central Flying School based at RAAF Base East Sale in Victoria. These experienced RAAF pilots fly the aircraft that comprise the team as a secondary role to their instructional tasks.

Of interest, RAAF Beech B350 Super King Air A32-350 was noted arriving with The Roulettes as a support aircraft.  It was using the radio callsign of "Beaufort 46".

UPDATE!  On Saturday 27 May, The Roulettes completed a spectacular display at The Old Station Fly-in and Heritage Show which was sadly cut short when it appeared that A23-025 reported a warning alarm and returned to Rockhampton Airport along with A23-027 to accompany it.  A23-052, A23-037, A23-012 and A23-051 all landed at the Old Station and remained parked for the night. 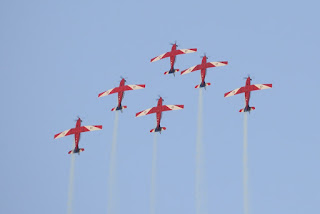 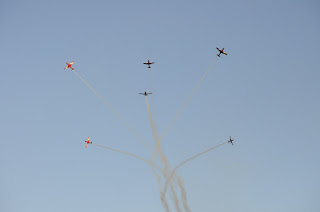 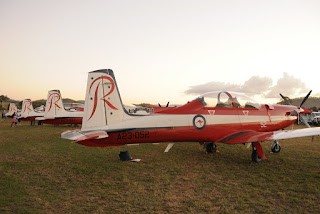 UPDATE!  Late morning on Sunday 28 May, the four PC-9/A's that stayed at The Old Station returned to Rockhampton Airport and in the early afternoon, it was noted that six of the seven aircraft all departed to RAAF Base Amberley.  It appears that A23-025 may have stayed at Rockhampton Airport to receive further attention.  It also appeared that Super King Air A32-350 also remained at Rocky on Sunday 28 May.

UPDATE!  On Tuesday 30 May, the final unknown RAAF PC-9/A departed Rockhampton Airport for RAAF Base Amberley as "Aladdin 67".