Late on Wednesday 3 May, Australian Army Boeing CH-47F 'Foxtrot' Chinook helicopter A15-304 was spotted arriving into Rockhampton Airport.  It looked to call in from the North. 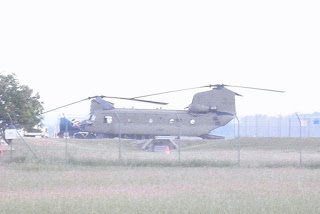 After a short time on the ground, it departed Rocky for Townsville.  A15-304 was heard to be using the radio callsign of "Brahman 304".

Meanwhile, over the last couple of days, a pair of Royal Australian Air Force (RAAF) Beech B350 Super King Air turboprops has flown around Rockhampton and the Shoalwater Bay Training Area (SWBTA).  On Wednesday 3 May, an unidentified Super King Air flying as "Dingo 13" was heard to fly into Shoalwater Bay from Townsville, while on Tuesday 2 May, A32-675 flying as "Dingo 04" completed several touch and go's at Rockhampton Airport.