A surprise arrival into Longreach Airport on Monday 15 May with General Aviation Maintenance (GAM) Dornier DO 228-202 VH-VJN spotted on the ground after flying in from Emerald and Barcaldine Airports. 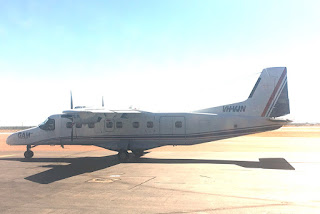 It turns out the VH-VJN had a very busy day of flying starting in Brisbane and heading to Biloela / Thangool and then Emerald.  After completing the Emerald to Barcaldine and Longreach and then back freight flights, VH-VJN then returned to Brisbane from Emerald.

This freight run from Emerald to Barcaldine and Longreach Airports is usually operated by a GAM AeroCommander 500-S and VH-UJU has of late been stationed at Emerald Airport to operate these flights.

It appears that VH-UJU may have maintenance issues as late on Monday 15 May, fellow GAM AeroCommander 500-S VH-YJS was noted touching down at Emerald Airport from Brisbane.

Indeed, on Tuesday 16 May, VH-YJS operated the Emerald to Barcaldine and Longreach Airport and freight run.

It seems that VH-UJU is still parked at Emerald Airport.