On Thursday 11 May, Royal Australian Navy (RAN) marked NH Industries MRH-90 Multi-Role Helicopter A40-021 was spotted on the ground at Rockhampton Airport.  It had earlier arrived from the South using the Australian Army radio callsign of "Destrier 21". 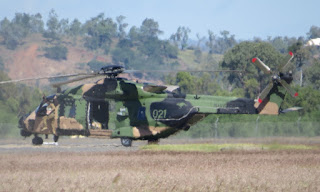 After a short while on the ground, A40-021 departed Rocky heading further North to Townsville.

Meanwhile, also on Thursday 11 May, a pair of Royal Australian Air Force (RAAF) Beech B350 Super King Air turboprop aircraft were heard to depart Williamson Airfield within the Shoalwater Bay Training Area (SWBTA).  The two unidentified Super King Airs were heard to be using the radio callsigns of "Dingo 22" and "Dingo 23".