Late on Friday 19 May, Virgin Australia's newest Boeing B737-800 VH-YFX made its first visit into Central Queensland touching down at Mackay Airport around an hour late from Brisbane as VOZ621.  After staying for the night, VH-YFX departed Mackay Airport early on Saturday 20 May and returned to Brisbane on the scheduled VOZ600 service. 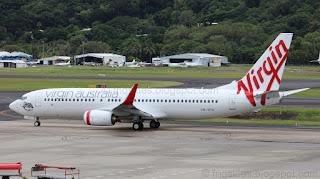 VH-YFX has been noted wearing the name 'Mackenzies Bay' and was delivered to Virgin Australia in Brisbane in late-April.  It eventually entered service in early May.  It was photographed above at Cairns Airport on its second day of operations on Sunday 7 May.

Sincere thanks to the FNQ Skies Blog for allowing us to share their great photo!