During the latter part of last week, QantasLink Dash-8-Q400 VH-QOR emerged from the Flying Colours paint-shop at Townsville in the new Qantas 'Silver-Roo' colour scheme. 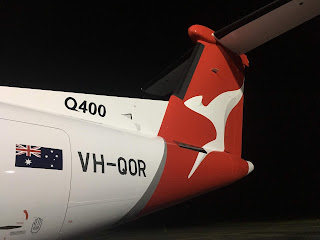 Almost immediately after re-entering service, on Friday 2 November, VH-QOR made its first visit into Central Queensland at Hamilton Island Airport wearing its new colour scheme.  It operated as QLK2503/2504 from and back to Cairns.

VH-QOR has since flown down the Queensland coast and is currently based out of Brisbane and it continues to operate into most Central Queensland Airports.  Late on Tuesday 6 November, it was photographed on the ground at Mackay Airport after arriving from Brisbane as QLK2520. 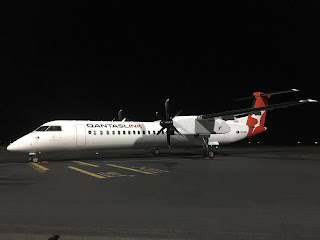 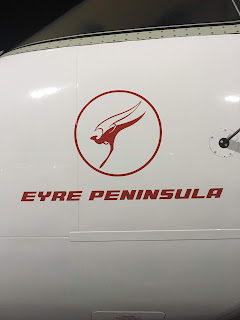 As shown, VH-QOR has retained its previous name of ‘Eyre Peninsula’. It was named in 2010 during a ceremony at Port Lincoln in South Australia.

Meanwhile, a little earlier also on Tuesday 6 November, the previous QantasLink Dash-8-Q400 to be re-painted - VH-QOP - was also spotted visiting Mackay Airport but as QLK2309 flying down from Cairns to Rockhampton Airport via Townsville and Mackay. 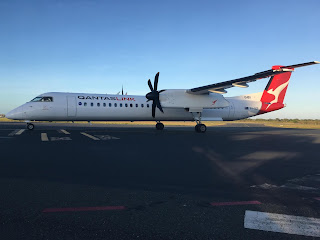 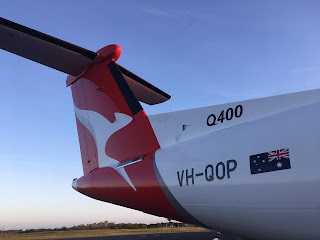 As we posted below, with the application of the new livery, VH-QOP has now been re-named to 'Hamilton' after was previously named 'Coffs Harbour' in 2010. 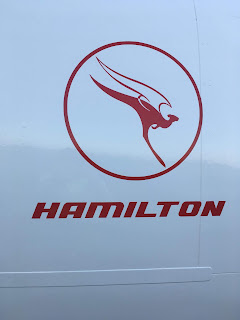 Both VH-QOR and VH-QOP join several other Dash-8-Q400s in the new and updated Qantas livery and kangaroo logo, which was introduced to coincide with the introduction the Boeing B787 Dreamliner into service with the airline late last year.  They are becoming quite a common sight at most Central Queensland Airports.

Of interest, fellow Dash-8-Q400 VH-QOS is now in the paint-shop at Townsville and is expected to emerge in the coming days in the new Qantas/QantasLink livery.