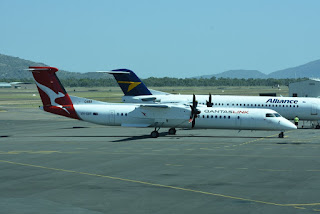 I managed to capture a photograph (above) of VH-QOT resting on the Townsville Airport apron before it later positioned empty to Brisbane as QLK2670.  It then re-entered service operated a regular passenger transport (RPT) flight to Gladstone Airport and back as QLK2340/2341.

VH-QOT has since visited most Central Queensland Airports before finishing the week at Cairns Airport.

From my photos, it appears that VH-QOT has now been named 'Parramatta' having been previously un-named since it arrived into Australia and entered service in 2009.

Meanwhile, also this week on Tuesday 27 November, the previous QantasLink Dash-8-Q400 to be re-painted, VH-QOS, was spotted visiting Mackay Airport. 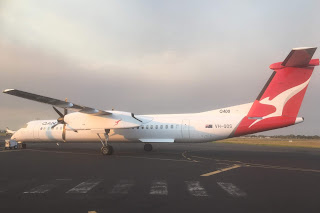 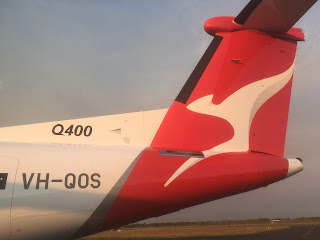 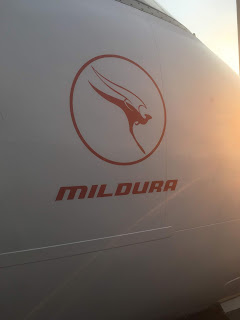 As we reported below, VH-QOS emerged from the Flying Colours paint-shop in Townsville earlier in November, however these are the first photos we've seen on VH-QOS in Central Queensland.

As shown, VH-QOS has retained its previous name of ‘Mildura’. It was named in 2010 during a ceremony at Mildura in Victoria.

Both VH-QOS and VH-QOT join several other Dash-8-Q400s in the new and updated Qantas livery and kangaroo logo, which was introduced to coincide with the introduction the Boeing B787 Dreamliner into service with the airline late last year.  They are becoming quite a common sight at most Central Queensland Airports.

Of interest, the Flying Colours Paint-shop Facebook page suggested that they have completed their re-painting schedule for this year and as such, there are no Dash-8-Q400 aircraft now 'offline'.  We shall see what transpires next year with the updated Qantas livery and the remaining Dash-8-Q400 and Next Gen aircraft.