Amongst all the QantasLink Dash-8-Q400s that are being re-painted, during this week, we hace discovered that Toll Freight Aviation / Toll Express Metro 23 VH-UZN has been re-painted into the 'new' Toll corporate livery that was unveiled on fellow Metro VH-UZP some time ago.  It was spotted visiting Mackay Airport on Wednesday 14 November. 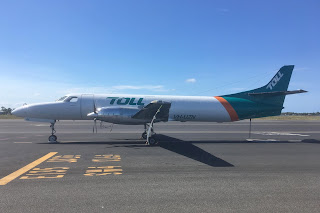 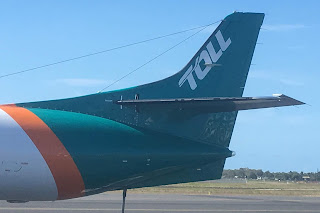 Research suggests that VH-UZN was re-painted at Wagga Wagga in New South Wales during the latter part of October and into November.  It made it's first visit into CQ, operating into Rockhampton and Mackay Airports on Thursday 8 November.

Of interest, VH-UZN previously wore the titles of its once former operator, Jetcraft Aviation, along with a livery including titles of 'The Australian' newspaper.

It has worn this colour scheme for over 10 years as shown in these photos captured at Maryborough Airport last year - and it certainly was starting to look quite tired!