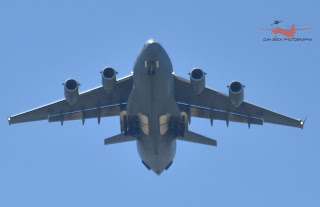 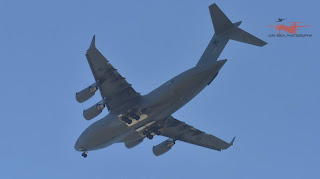 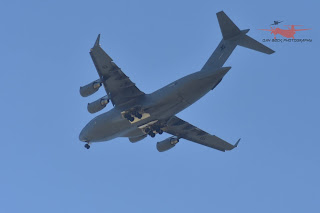 South of Emerald, the Globemaster broke off and turned East towards Bundy.  After completing its airwork at Bundaberg Airport, A41-213 then flew out at low-level towards Gayndah before returning to Amberley via Gympie.

Of interest, A39-004 "Dragon 35" continued North overhead Emerald before returning to Amberley.

Fellow RAAF KC-30A MRTT A39-001 "Dragon 36" looked to fly North from Amberley and was noted operating West of Townsville presumably in support of the RAAF's Exercise High Sierra which started around Townsville today.

UPDATE!  On Tuesday 27 November, RAAF C-17 Globemaster A41-207 "Stallion 61" and RAAF KC-30A MRTT A39-001 "Dragon 36" both flew up together from Amberley.  They passed overhead Rockhampton but with high cloud, they were unable to be seen.  Approaching Stanage Bay, both aircraft did a 'u-turn' and returned to Amberley - the KC-30A flying inland while the C-17 flew down the Queensland coast.  Approaching Bundaberg, A41-207 "Stallion 61" then descended and completed a touch-and-go landing at Bundaberg Airport.  It then continued to Amberley.