As we mentioned on our Facebook page, early on Thursday 19 April, authorities were alerted to a missing Gyrocopter and pilot somewhere between Bundaberg and Yeppoon.  As many as 10 helicopters and a couple of fixed wing aircraft were then called into action to search the missing aircraft.  Over the course of Thursday 19 April, most of these helicopters called into Gladstone Airport to refuel before finishing the day and staying for the night at Bundaberg Airport.

Australian Maritime Safety Authority (AMSA) (Cobham SAR Services Pty Ltd) Bombardier CL-600-2B16 Challenger 604 bizjet VH-XND "Rescue 660" flew down from Cairns to co-ordinate the search efforts and also operated along the Capricorn Coast below 1000ft. After a couple of hours it returned to Cairns to complete a crew change.  It then flew back South to search around Bundaberg before landing at Bundaberg Airport for the night.

Of the numerous helicopters to participate in the search, local emergency rescue choppers led the efforts with the Capricorn Helicopter Rescue Service (CHRS) (Babcock Mission Critical Services Australasia) Bell 412EP helicopter VH-VAU "Rescue 300" operating out of its Rockhampton Airport base, while LifeFlight (CHC Helicopters Australia / Lloyd Helicopters) Eurocopter MBB-BK 117 C-2 (EC145) helicopter VH-SYG "Rescue 522" operated out of its Bundaberg Airport base and also refuelled during the day at Gladstone Airport - as pictured below - along with some of the other helicopters.

Operating from Gladstone Airport was the bright yellow Adelaide-based Helistar Aviation Aerospatiale AS355 F2 helicopter VH-SDG.  It has believed to have been operating out of Rockhampton Airport on powerline inspection flights during this week. 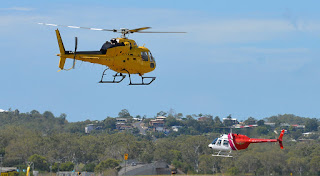 Finally, while not pictured, Heli-Aust Whitsundays (Gladstone Helicopters) Airbus Helicopters EC135 P3 (CPDS) VH-ZGP which is presently operating out of Gladstone Airport on marine pilot transfer flights, departed there and searched an area North of Yeppoon.  It was also noted calling into Rockhampton Airport for fuel.

UPDATE!  Sadly, the search for the missing Gyrocopter, which was on a flight between Bundaberg and Yeppoon, ended tragically on Friday 20 April, with the wreckage of the missing aircraft found, along with the body of the pilot who was found deceased at the scene.  A search helicopter spotted the wreckage early in the morning in bushland near Baffle Creek, shortly after the search resumed with first light.

Sincere thanks to local plane spotter Michael F for taking the time to capture all of these great photos!

Also sincere thanks to Rockhampton plane spotter Trevor H for sending through the details of the helicopters that were involved in the search!