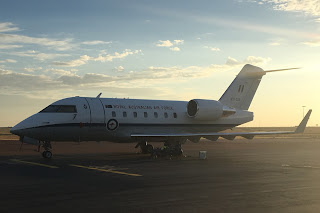 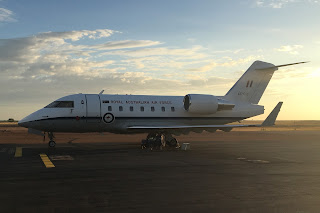 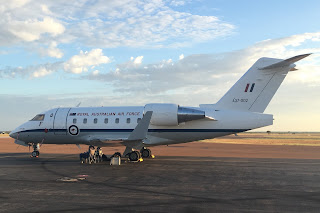 It appears that it brought Australian Governor General Sir Peter Cosgrove to town where he had a tour of the nearby Qantas Founders Museum and attended a civic reception at the Australian Stockman's Hall of Fame.  It is also expected that he would attend the grand opening of the new Waltzing Matilda Centre in Winton on Friday 20 April which also incorporates the four-day 'Way Out West Fest' music festival.

An unknown RAAF Beech B350 Super King Air using the radio callsign of "Consort 08" appears to have taken Mr Cosgrove from Longreach to Winton.  It then returned to Longreach Airport from Winton later in the afternoon before it departed to Towsnville.

It was also believed that State Government Ministers and representatives were also due to attend and consequently, on Friday 20 April, the Queensland Government Airwing (State of Queensland) Raytheon Hawker 850XP bizjet VH-SGY was noted arriving into Winton Airport from Brisbane.  It appears that VH-SGY will then continue to Longreach Airport before flying back to Winton early on Saturday 21 April before finally returning back to Brisbane.

One other notable arrival into Winton Airport for the festival was Alliance Airlines Fokker F-70 jet VH-NKQ which touched down from Brisbane late on Thursday 19 April on a closed charter flight as UTY582.

UPDATE!  Early on Saturday 21 April, VH-NKQ departed Winton for Longreach Airport as UTY583.  It then continued to Brisbane again as UTY583.  Later in the day, VH-NKQ was then noted returning to Winton as UTY586.

All photos taken by Calen Harvey  ©
Posted by Damian F at 3:35 PM