On Sunday 1 April, QantasLink Dash-8-Q400 VH-QOI was finally spotted in CQ wearing its new 'Silver-Roo' colour scheme.  It was captured arriving into Mackay Airport from Brisbane as QLK2512. 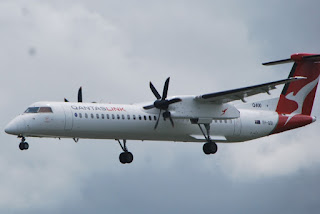 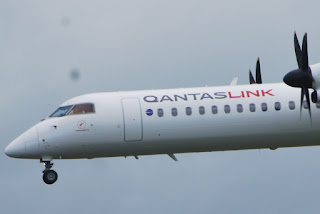 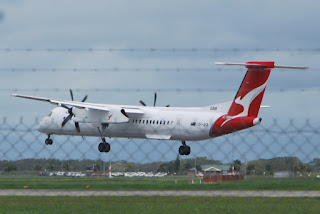 VH-QOI emerged from the Flying Colours paint-shop at Townsville Airport in late March having become the first Dash-8-Q400 that wore the 2007-style 'New Roo' Qantas livery to be re-painted.  It joins VH-QOA, VH-QOB, VH-QOC, VH-QOD, VH-QOE and VH-QOF in the new and updated Qantas livery and kangaroo logo, which was introduced to coincide with the introduction the Boeing B787 Dreamliner into service with the airline late last year.

Of interest, it appears that VH-QOI has retained its original name of ‘Tamworth’.

It appears that no more Dash-8-Q400 aircraft are 'planned' to enter the paint-shop with (we believe) a Qantas Boeing B737-800 and QantasLink Dash-8-Q300 now in Townsville.

Sincere thanks to Mackay plane spotter 'JM' for taking the time to capture and send through these great photos!