Over the course of this week, JetGo Australia Embraer ERJ-145LR regional jet VH-JGR has been noted calling into Rockhampton Airport each day while operating scheduled services between Townsville and the Gold Coast via Rocky.


VH-JGR also operated a closed charter flight into Rockhampton Airport on Saturday 7 April, arriving from and later departing back to Brisbane.

The aircraft will reportedly then take up the Australian registration marking of VH-JGK.

Finally, last week, Jetgo also released a timetable (shown below) and starting taking bookings on their new direct flights between Brisbane and Karratha which will kick off from Monday 25 June (subject to final regulatory approval).  The twice weekly service will utilise a two-class 98-seat Embraer E-190 jet. 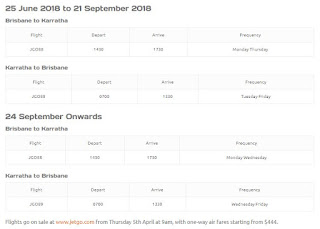 The new services are being established with support from the City of Karratha.

From late September Jetgo is planning to add flights between Karratha and Singapore, however considerably more work is needed before these flights can commence.