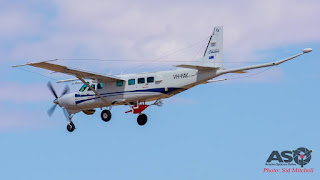 The usually Perth (Jandakot) based aircraft has been noted operating around Northern and Western parts of Queensland and appears to be returning West as it was photographed (above) on approach to Alice Springs Airport later in the day.

VH-FAY was also converted from a standard Grand Caravan to a Texas Turbine Conversions Supervan 900, where the Pratt and Whitney Canada PT6A-114A engine is replaced by a Honeywell TPE331-12JR engine, and the 3-bladed prop is replaced by a 4-bladed prop.

As has been reported, this conversion delivers a 40% reduction in takeoff distance, improved rate of climb, 14 knots faster on the same fuel burn (or 14% less fuel at the same airspeed), 7000 hour time between overhauls (compared to 3600 hours with the original engine), and a lower hourly operating cost.