Early on Friday 6 April, a nice and interesting pair of New Zealand-registered light General Aviation (GA) aircraft was spotted resting quietly at Longreach Airport after it appears they arrived the previous day.  The aircraft have been identified as Pazmany PL-2 ZK-TLP and Vans RV-7A ZK-ECE. 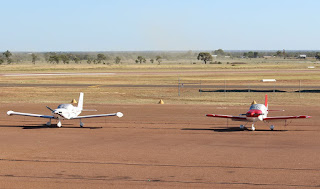 It appears the pair are touring around Australia and arrived into Longreach Airport from Redcliffe via Chinchilla and Charleville on Thursday 5 April.

One report suggests that the Pazmany ZK-TLP is the only one flying in New Zealand and that there are only two airworthy examples in Australia.

UPDATE!  On Saturday 7 April, both ZK-TLP and ZK-ECE were noted departing Longreach Airport for the South-West.

UPDATE!  On Sunday 8 April, both ZK-TLP and ZK-ECE were noted departing Birdsville for Northern New South Wales (NSW) on the continuation of their tour.