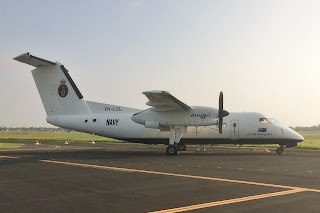 The heavily modified Dash-8-200 is usually based at Cairns Airport with Cobham Aviation and landed at Mackay Airport from there on Monday 16 April.  It has then completed flights out of Mackay Airport each day of around six hours duration each time returning to Mackay Airport after the sun has set.