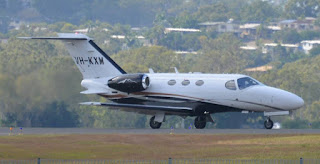 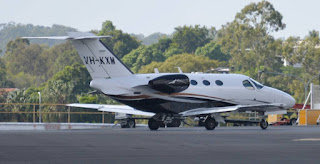 It had arrived from Bankstown and I presume took on fuel before continuing to Normanton.

Meanwhile, a nice corporate turboprop in the form of Austrek Aviation Beech B200 Super King Air VH-ZGD was also spotted visiting Gladstone Airport but on Thursday 19 April.  It arrived from Toowoomba and Archerfield, and after some four hours on the ground, it returned to these two places.

Of interest, fellow Austrek Aviation King Air VH-WXO was noted flying into Maryborough Airport from its Toowoomba base on Sunday 15 April.  Then on Monday 16 April, VH-WXO continued to Century Mine via Middlemount and Hughenden Airports.  On Tuesday 17 April, VH-WXO returned to Toowoomba via Hughenden and Wanella Station near Coppabella.

Finally, New South Wales-based Airspeed Aviation / BPW Aviation Cessna 441 Conquest II VH-EQU also visited Gladstone Airport (amongst other places) this week.  On Monday 16 April, it flew from Narrabri to Cairns before starting an 'adventure' heading back South via Innisfail, Townsville and finally Mackay Airport where it spent the night.  Then on Tuesday 17 April, VH-EQU continued from Mackay to Rockhampton and Gladstone Airport where it stayed for the night.  It then departed Gladstone on Wednesday 18 April for Bundaberg, Hervey Bay (Fraser Coast) and Maryborough Airports before continuing to Gympie and Lismore in New South Wales.  Over the latter part of the week, it visited yet more regional airports in New South Wales.

Sincere thanks to local plane spotter Michael F for again taking the time to capture and send through these great photos!

All photos taken by Michael Fleetwood  ©
Posted by Damian F at 8:15 PM