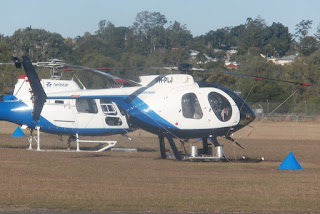 VH-PLJ was spotted parked next to another nice chopper which has been operating out of Rockhampton Airport in the form of Helistar Aviation (of West Beach, South Australia) Aerospatiale AS.350BA Squirrel helicopter VH-UTN which is also believed to be operating airborne electrical power-line inspection flights in the area. 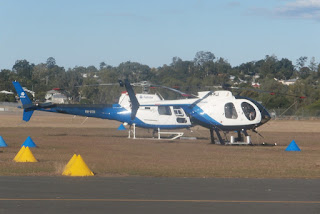 Of interest, Aeropower Pty Ltd is a Brisbane-based, Australia-wide airborne electrical contractor, which commenced operations in 1991.  Aeropower specialises in a full range of electrical power industry services including patrol, inspection, construction, stringing, washing, performing live-line or de-energised maintenance repairs, and providing technical analysis and reporting on the condition of the client’s assets.

Aeropower has also grown to not only encompass electrical maintenance, but to provide powerline and flight training, as well as commercial helicopter charter.

Their website assures clients that they are "dedicated to serving the electrical industry in airborne maintenance".

Sincere thanks to local plane spotter Trevor H for sending through these great photos!

All photos taken by Trevor Hardsman  ©
Posted by Damian F at 8:08 PM