On Thursday 1 June, a nice visitor into Mackay Airport was Air Loyauté (Air Loyalty) (New Caledonia) De Havilland Canada DHC-6-300 Twin Otter F-OIAY.  The Twin Otter arrived from the Gold Coast and departed a short time later for Cairns (as shown below) where it expected to undergo planned maintenance. 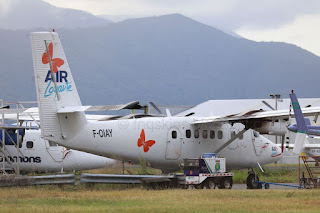 F-OIAY had arrived into Australia via the Gold Coast on Wednesday 31 May.

Of interest, Air Loyauté (Air Loyalty) is a French domestic airline of the South Pacific, based in New Caledonia, which carries out air transport on request from Noumea's Magenta Airport.

Thanks to the fantastic FNQ Skies Blog for allowing us to share their photo of this great little visitor to CQ!