A nasty incident at Rockhampton Airport on Tuesday 6 June with Peace Aviation Beech A36 Bonanza VH-MMB suffering a mishap while landing on Rocky's Runway 15 during the early part of the morning. 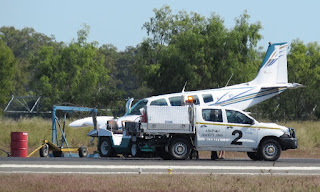 It appeared on first looks that the front landing gear had collapsed however there was later an unconfirmed report that the pilot had selected 'gear up' rather than 'flaps up' after landing.

The 'disabled aircraft' briefly closed the Runway at Rockhampton Airport with an inbound Virgin Australia flight from Brisbane forced to circle and hold North of the Airport for around an hour before it eventually landed.

The main Runway 15/33 was re-opened but at a reduced length with a displaced threshold on Runway 15 placed around the same location as Taxiway 'Alpha'.

During the early part of the afternoon, VH-MMB was towed off the Runway back to the Peace Aviation hangar.

It is understood that the Bonanza wasn't being flown for Peace Aviation at the time but rather a private pilot was at the controls.