From Sunday 18 June, local plane spotters will no longer see Virgin Australia coloured aircraft landing at Rockhampton Airport as it appears that the airline has brought forward plans to operate wet-leased Alliance Airlines Fokker F-70 and F-100 jets into the beef capital.

It was originally thought (certainly by me) that the airline would only be ceasing flying the ATR 72 turboprop aircraft on their regional Queensland services from July, however the Virgin Australia website suggests that from Monday 19 June, all flights to and from Rockhampton Airport will be operated by Alliance Airlines. 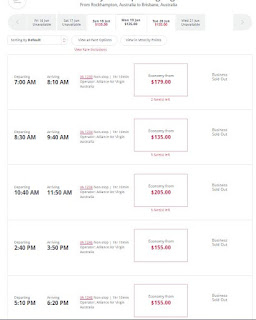 Alliance Airlines Fokker F-100 jet VH-FKJ is currently scheduled to arrive into Rockhampton Airport late on Sunday 18 June on the scheduled VOZ1251 service from Brisbane and remain overnight before returning to the capital early on Monday 19 June as VOZ1230.

It has been reported previously that these changes to regional Queensland services have been brought about by Virgin Australia wanting to consolidate its turboprop operations to routes within the ACT, New South Wales and Victoria as it prepares to reduce the number of ATRs in the fleet from 14 to six.  As a result, the airline would end ATR 72 turboprop operations in Queensland.


Virgin Australia was reportedly going to withdraw ATR 72 services from Brisbane to Central Queensland destinations including Moranbah, Gladstone, Bundaberg and Rockhampton, as well as to Port Macquarie in New South Wales from July.  ATR 72 services were withdrawn from Emerald Airport in 2016.

The downturn in the resources sector has led to a a drop in demand on a number of these Central Queensland regional routes.

The decision to reduce Virgin’s ATR fleet, as well as its Embraer E-190 regional jet fleet, was first announced in June 2016.