On Thursday 8 June, JetGo Australia Embraer ERJ-140LR (ERJ-135KL) regional jet VH-ZJG made its first visit to Central Queensland, arriving into Rockhampton Airport on the scheduled JG73 service from the Gold Coast.  It had earlier positioned into the Gold Coast from Sydney as JG91 before flying North. 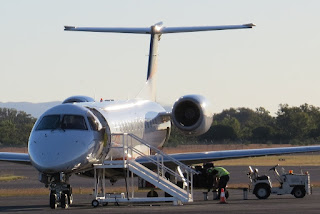 After unloading and then loading several passengers and their bags, VH-ZJG continued to Townsville, again as JG73.

As we reported recently, JetGo's other ERJ-140 VH-ZJE surprised local plane spotters by operating the Townsville to Rockhampton and Gold Coast return services from late May.


Earlier on Thursday 8 June, VH-ZJE operated the Southbound JG70 service from Townsville to Rockhampton and the Gold Coast but later positioned from the Gold Coast to Sydney as JG90.

Of interest, VH-ZJG was delivered to JetGo Australia in Brisbane in October 2016 as N297SK.  It was the first of two 44-seat Embraer ERJ-140LR (ERJ-135KL) regional jet aircraft delivered to the airline.  VH-ZJE (ex N295SK) was delivered in January this year.


As we've also mentioned, JetGo is also reportedly due to take delivery of a larger 50-seat Embraer ERJ-145LR during this year.  The aircraft is reported to be N577RP which is also operated for Republic Airways Holdings.