David G from Maryborough Aviation Services has sent through what are the first photos of the newly re-registered Cessna 208B Supervan 900 VH-IHQ which was photographed at Maryborough Airport this week. 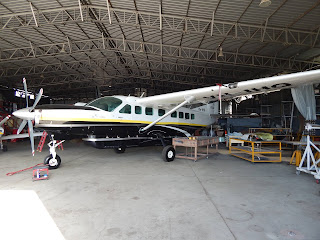 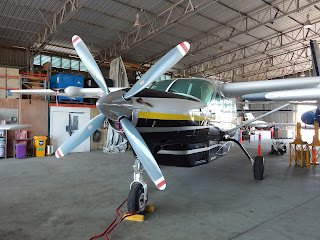 As we mentioned previously, the Supervan 900 was previous registered P2-HFD of Helifix Operations of Papua New Guinea (PNG) and ferried into Maryborough Airport in December 2016.


VH-IHQ has been registered in New South Wales and so may soon take up residence down South.

Meanwhile, shown in the background of a couple of these photos is the now Maryborough-based Israel Aircraft Industries (IAI) 1124A Westwind II bizjet VH-IER.

In May we reported that VH-IER was on the move, calling into Bundaberg Airport before departing to the Illawarra Regional Airport at Wollongong for planned maintenance.  Last Saturday 17 June, VH-IER returned to Maryborough, completing its return flight from Wollongong via the Sunshine Coast.

Sincere thanks to David for taking the time to capture and send through these great photos!