Late on Saturday 17 June, Jetstar Airways Airbus A320(SL) VH-VFY called into Mackay Airport while operating the JST888 scheduled service from Brisbane.  It is the first visit of this aircraft since stickers promoting nutritional supplements and health foods brand 'Bio Island' were added to the aircraft. 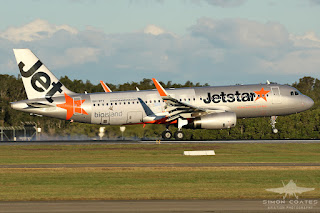 It appears that the 'Bio Island' stickers were applied earlier in June.

Bio Island has been dedicated to providing families with nutritional supplements and health foods.  You can find out more on their website:  http://www.bioisland.com.au/  .

VH-VFY returned to Brisbane a little later in the evening as JST889.

Meanwhile, also on Saturday 17 June, Jetstar Airways Airbus A320(SL) VH-VFU - which has also recently been adorned in promotional stickers - was also noted visiting Central Queensland, making two visits to Proserpine (Whitsunday Coast) Airport.  It initially flew into Prosie from Sydney as JST840 before departing to Brisbane as JST837.  VH-VFU then returned to Proserpine as JST836 before departing back to Sydney as JST841.

Sincere thanks to Brisbane plane spotter Simon C for allowing us to share his great photo of VH-VFY arriving into Brisbane Airport on Sunday 18 June.

All photos taken by Simon Coates  ©
Posted by Damian F at 9:58 PM