On Thursday 22 June,  Australian Army NH Industries MRH-90 Multi-Role Helicopter A40-014 was spotted departing Rockhampton Airport.  It looked to arrive from the North a little earlier and was heard to use the radio callsign of "Destrier 11". 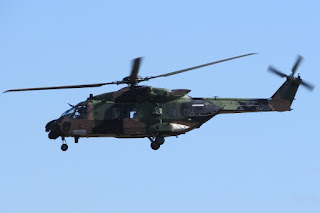 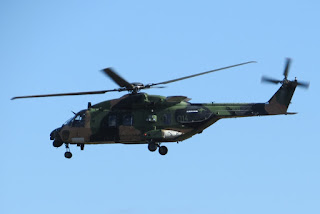 A40-014 was captured as it departed Rocky heading to Townsville.

As mentioned below, on Tuesday 20 June, another MRH-90 was noted passing through Rockhampton Airport heading to Brisbane also as "Destrier 11" - we suspected that to be A40-011 but given A40-014 was using the same callsign, we are now a little unsure!

Meanwhile, during the late afternoon also on Thursday 22 June, another Australian Army MRH-90 was noted passing through Rockhampton Airport.  "Destrier 21" heard to touch down at Rocky from the North and after a short time on the ground it departed to Townsville via the Shoalwater Bay Training Area (SWBTA).  This MRH-90 could've been A40-021 but this is not confirmed.

Thanks to local plane spotter Kayanne H for taking the time to capture and send through these great photos!