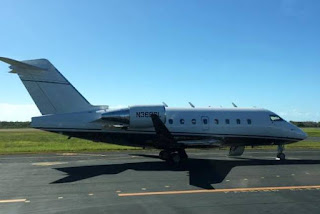 It looked to arrive from and later depart back to Melbourne (Essendon) Airport.

Meanwhile, also on Monday 5 June, Balmoral Air Dassault Falcon 2000LX bizjet VH-WIO was noted making yet another trip to Hamilton Island Airport.  As per usual, it touched down from Bankstown, but on this occasion, it looks to be staying for at least the night.

Finally, a nice corporate turboprop aircraft was noted arriving into Roma and then Gladstone Airports also on Monday 5 June in the form of Corporate Aircraft Charter Beech B200 King Air VH-URU.

Despite being registered in South Australia, the King Air appears to be operating out of Bankstown and on Monday, VH-URU flew across from there to Sydney before flying North to Roma and Gladstone Airports.


At the time of writing, VH-URU is due to depart Gladstone Airport for Archerfield around lunchtime on Tuesday 6 June.

Of interest, VH-URU was involved in a nasty 'wheels-up' incident at Adelaide Airport in September 2008 when after a departure, its wheels didn't fully retract, so the aircraft was forced to make an emergency landing.  The King Air landed with the gear up and all passengers and crew evacuated after the aircraft came to a stop. Thousands witnessed the incident as the Qantas Airways Airbus A380 VH-OQA was about 45 minutes from arriving into Adelaide for the very first time.