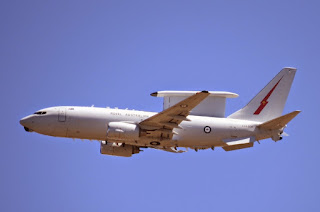 It appears that after completing the missed approach A30-004 continued to Townsville.  It was heard using the radio callsign of "Mitchell 06".

UPDATE!  On Thursday 8 June, A30-004 was back in parts of CQ again as "Mitchell 06".  It was heard completing a missed approach at Gladstone Airport during the afternoon.