On Monday 12 April, there was a nice selection of locally-based corporate bizjets and other light General Aviation (GA) aircraft to be spotted and noted calling into various Central Queensland Airports.
Early in the morning, Mackellar Mining Equipment / Flight Options (Australia) Cessna 560 Citation Ultra bizjet VH-MMC arrived into Rockhampton Airport from its Sunshine Coast base. 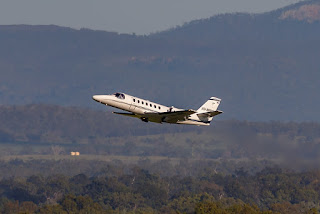 It was then spotted above as it departed back there.
New Air Charter Services / Flight Options (Australia) Embraer EMB-505 Phenom 300 bizjet VH-VKX looked to call into Emerald Airport from Brisbane and the Sunshine Coast before it then departed to Roma Airport.  VH-VKX then returned to the Sunny Coast and Brisbane.
While prior to the sun coming up, new Navair Flight Operations Embraer EMB-500 Phenom 100 bizjet VH-LXZ flew from Bankstown to Cessnock and then up to Mackay Airport.  It then flew to Bowen and Proserpine (Whitsunday Coast) Airports before then returning back South to Bankstown.
After arriving yesterday, Falconair (NSW) Dassault 900 Falcon Mystere bizjet VH-CAD departed Hamilton Island Airport for Cairns and Aurukun before it then flew down to Sydney.  It then flew up to the Gold Coast before returning to Hamilton Island Airport for the night.
And re-registered AAA Aircraft / Flight Options (Australia) Cessna 550 Citation Bravo bizjet VH-CCJ flew up from the Sunshine Coast to complete airwork around Bundaberg Airport.  It then landed at Bundy for a short time before returning to the Sunny Coast.
UPDATE!  On Tuesday 13 April, VH-CCJ was back in the region, looking to complete airwork around Maryborough Airport while on another flight out of and back to the Sunshine Coast.
Meanwhile, also on Monday 12 April, several lighties were spotted and noted passing through Longreach Airport, including Beech B200GT Super King Air 250 VH-JHP which arrived from and later departed back to its Toowoomba base. 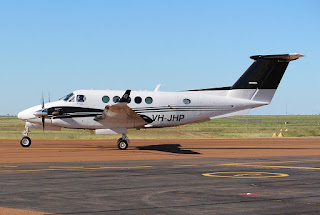 As mentioned below, VH-JHP is a recent arrival to the country having being registered in October 2020 with it previously operating in New Zealand as ZK-VMF.
A couple of other King Airs in the form of Austrek Aviation Beech B200 King Air VH-ZMW called into Longreach Airport from its Toowoomba base before departing to Richmond.  It then returned to Toowoomba.
And after arriving the previous day, SFC Farming Raytheon B200 King Air VH-TXT departed Longreach Airport for RAAF Base Tindal at Katherine in the Northern Territory.
While New South Wales-based Raytheon A36 Bonanza VH-YGM arrived into Rockhampton Airport once again from Orange in New South Wales.
UPDATE!  On Tuesday 13 April, VH-YGM departed Rockhampton Airport for Emerald and Moura Airports before it then returned to Rocky.
And the sleek Heli Qld Airbus Helicopters EC 130 T2 VH-WJY looked to depart the Lakeside Airpark at Bloomsbury near Proserpine for Rockhampton and then Gladstone Airports.
UPDATE!  On Tuesday 13 April, VH-WJY departed Gladstone Airport for the Sunshine Coast and Toowoomba.
Finally, also on Monday 12 April, Seair Pacific / Istlecote Textron Aviation (Cessna) 208B Caravan VH-TLH flew up from Hervey Bay (Fraser Coast) and Maryborough Airports to Wanella Station (near Coppabella) before flying back down to Hervey Bay Airport.
Photos taken by Steve Vit and Greg Weir  ©
Posted by Damian F at 9:11 PM