On Friday 30 April, Air Kiribati Embraer E190-E2 (ERJ-190-300 STD) VH-IKJ was spotted at Rockhampton Airport, operating what appears to be another training flight. 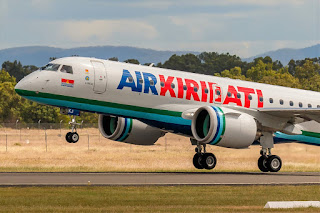 The Embraer arrived from Bankstown and taxied in and parked in front of the Air Traffic Control Tower. After some time, it departed to Brisbane. 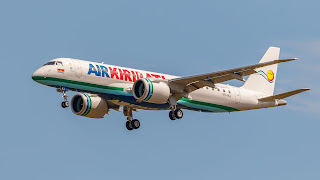 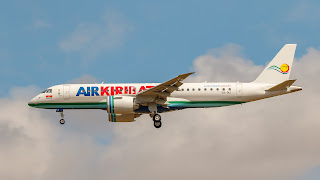 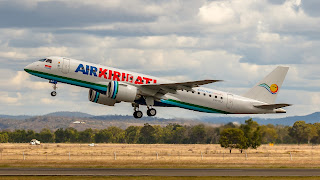 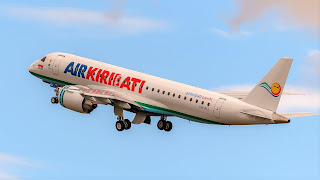 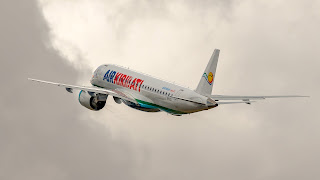 As mentioned previously, the brand new Embraer was delivered to Air Kiribati at Toowoomba-Wellcamp in January 2020 wearing its Brazilian delivery registration marking of PR-EHT.
It was added to the Australian Aircraft Register in February as VH-IKJ is owned by and registered to the Government of Kiribati, with Sydney-based passenger and cargo airline Pionair Australia as the registered operator.
Air Kiribati is the flag carrier of the Republic of Kiribati (pronounced Kiribas) and operates scheduled passenger services to 20 atolls spread over an area of 3.5m sq km.

It is headquartered at Bonriki International Airport on the island of Tarawa in the Gilbert Islands.  The airline operates an international service from Tarawa to Tuvalu.  Regional charter flights, medical evacuation and search and rescue services are also undertaken by the airline.
Kiribati is a small nation that covers an immense geographical area - which is mostly water.  The E190-E2 was chosen for its ability to economically connect two important islands, Tarawa in the west and Kiritimati or Christmas Island in the east. Even with the E2 this is more than a 4 hour flight.
VH-IKJ appears to have completed a handful of flights between Brisbane and Tarawa.
Sincere thanks to local photographer Steve V for allowing us to share these great photos!
All photos taken by Steve Vit  ©
Posted by Damian F at 8:19 PM