On Friday 9 April, there was yet another nice first-time visitor into Central Queensland with new Air Charter Services / Flight Options (Australia) Embraer EMB-505 Phenom 300 bizjet VH-VKX spotted arriving into Rockhampton Airport.  It looked to fly up from Brisbane. 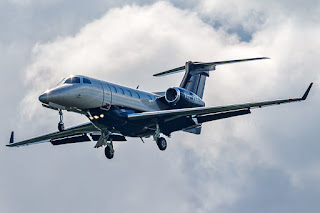 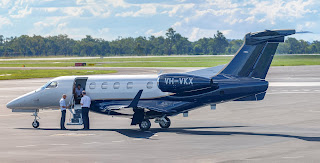 After parking on the main apron for around an hour, VH-VKX then departed to the Sunshine Coast before returning to Brisbane.
Of interest, VH-VKX was delivered to Australia via Brisbane in March this year having only been registered in February.
Also noted visiting Rockhampton Airport, also on Friday 9 April, was new Avcair (Avgunn) LearJet 60 bizjet VH-OLJ.  It looked to arrive from and later depart back to its Brisbane base.
This is the third visit into CQ by the still fairly new LearJet 60 over the last week - see Blog posts below!
Meanwhile, slightly smaller, but also noted visiting Rockhampton Airport, also on Friday 9 April, was the Queensland Police Service (Airwing) (State of Queensland) Raytheon B1900D VH-PSK.  It arrived from Cairns and Townsville and later departed to Brisbane.  VH-PSK then returned direct to Townsville and Cairns later in the day.
Ipswich-based Airborne P/L (Palm Lake Works) Pilatus PC-12/47E VH-PLE landed at Barcaldine Airport from Archerfield and appeared to stay.
UPDATE!  On Saturday 10 April, VH-PLE departed Barcaldine Airport for Archerfield and the Gold Coast.
VH-PLE also looked to call into Charleville Airport on Wednesday 7 April, arriving all the way from Melbourne (Avalon) and then departing to Dinah Island up in Far North Queensland.
Finally, also on Friday 9 April, Corporate Aviation Bell 429 Global Ranger helicopter VH-EQP finally departed Hamilton Island Airport and returned to its Southport base via Gladstone Airport.
It had arrived into Hamo back on Thursday 1 April.
While it appeared that on Thursday 8 April, the sleek Heli Qld Airbus Helicopters EC 130 T2 VH-WJY arrived into at the Lakeside Airpark at Bloomsbury near Proserpine from its Toowoomba base via a fuel stop at Rockhampton Airport.
Sincere thanks to local photographer Steve V for allowing us to share these great photos!
All photos taken by Steve Vit  ©
Posted by Damian F at 8:59 PM