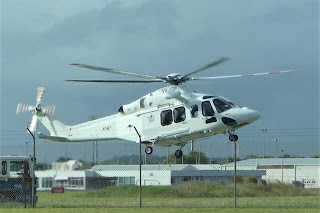 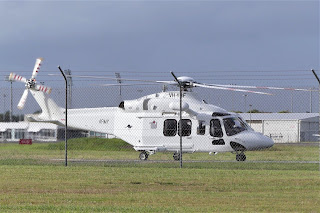 VH-YBF was noted to ferry into Townsville after flying up from Bankstown via Armidale, Oakey, Gladstone and Mackay Airports.

VH-YBF is registered to Helicorp (Toll Group) and is reportedly the first of three AW139 helicopters that has been leased to the Australian Army's 5th Aviation Regiment based at Townsville.  They have been provided to the Army to provide a similar capability to the NH Industries MRH-90 so pilots can keep up their hours.
The Australian Army's MRH-90 helicopters have suffered years of poor serviceability due to various technical issues so AW139 helicopters are a 'stop gap' measure.
There are reports though that the AW139 could ultimately be used by the Australian Army as a general utility helicopter.
UPDATE!  It appears that VH-YBF started flying for the Australian Army at Townsville on Thursday 6 May with it completing a local flight.  It was seen and heard to be using the flight number and radio callsign of 'MGIC237' / "Magic 237".
Sincere thanks to local plane spotter 'JM' for taking the time to capture and send through these great photos!
All photos taken by 'JM'  ©
Posted by Damian F at 9:34 PM