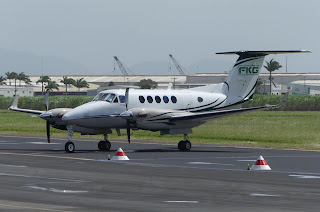 It had arrived into Mackay Airport from its Toowoomba base the previous day.
Fellow Redjet Aviation Piper PA-31 Navajo VH-PJU visited my local Clermont Aerodrome once again from its Toowoomba base.
Brescon (Toowoomba) Beech B200 VH-WXN departed Emerald Airport for Toowoomba-Wellcamp Airport.  It had arrived the previous day - see Blog post below!
While the Queensland Government Airwing (State of Queensland) Raytheon B300 Super King Air VH-SGQ landed at Hervey Bay (Fraser Coast) Airport from Brisbane before it then departed to Cairns. During the afternoon, VH-SGQ flew down from Cairns to Townsville and Maryborough Airports before returning to Brisbane.
Seair Pacific / Istlecote Cessna 208 Caravan VH-TQW flew up from Hervey Bay (Fraser Coast) Airport to Wanella Station (near Coppabella) before flying back down to Maryborough Airport and then Hervey Bay Airport.
And Hinterland Aviation Cessna 310R VH-TFY was noted visiting Rockhampton Airport.  It looked to arrive from and then later return back to Cairns and was noted flying as 'HND835' / "Hinterland 835".
Photos taken by 'JM' and Brodie Lawson  ©
Posted by Damian F at 8:05 PM