On Friday 23 April, Australian-based but American-registered Eclipse EA500 bizjet N465DG touched down at Rockhampton Airport from its Tamworth base. 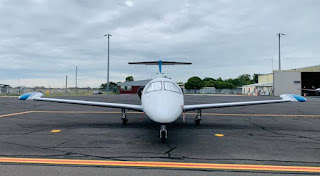 UPDATE!  The Eclipse EA500 bizjet N465DG departed Rockhampton Airport for Tamworth on Friday 30 April.
As shown, the Eclipse parked alongside the classic 1953-build Cessna 195A VH-ONV which flew into Rockhampton Airport the previous day.  It remains parked at Rocky with the owner reportedly driving the remaining way up to the Whitsundays! 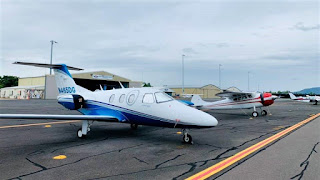 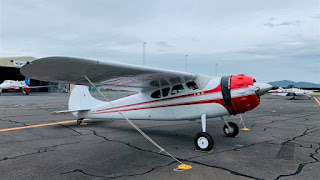 Meanwhile, also on Friday 23 April, Falconair (NSW) Dassault 900 Falcon Mystere bizjet VH-CAD was noted arriving into Proserpine (Whitsunday Coast) Airport.  It looked to fly up from Sydney.
While another classic in the form of 1969-built Beech H18 VH-MBU landed at Emerald Airport from Scone in New South Wales before it then departed to Cairns.  VH-MBU has been noted flying around Victoria during the early part of the week.
Pilatus PC-12s - Brisbane-based Pilatus PC-12/47E VH-AAC and Ipswich-based Airborne P/L (Palm Lake Works) Pilatus PC-12/47E VH-PLE - flew down from Mount Isa to Brisbane via several stops including Dalgonally and the Goonoo Feedlot.  VH-PLE continued to the Gold Coast.
And New South Wales-based Piper PA-39-160 Twin Comanche VH-LLL flew up to Winton from Mittagong via Walgett and Charleville Airports.
Finally, also on Friday 23 April, Capricorn Helicopter Rescue Service (CHRS) / Babcock Mission Critical Services Australasia Bell 412 helicopter VH-LSY was noted departing Rockhampton Airport for the Sunshine Coast and Ballina / Byron Bay Gateway Airport.  It is due to continue to Coffs Harbour early on Saturday 24 April where it appears that it will undergo planned maintenance.
As mentioned below, last Friday 16 April, fellow Babcock Mission Critical Services Australasia Agusta AB412 (Bell 412) VH-LSV was noted arriving into Rockhampton Airport from the North.  It touched down from Horn Island via all stops after previously operating across Cape York out of Horn Island as "Rescue 700". 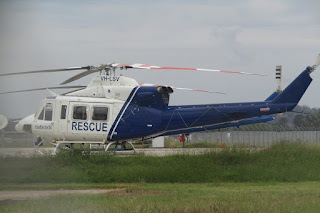 It was photographed above outside the CHRS hangar also on Friday 23 April so could have taken up operations out of Rocky.
Photos taken by Paul Tyler and Trevor Hardsman  ©
Posted by Damian F at 7:59 PM