Also on Friday 23 April, another nice little bizjet to call into Rockhampton Airport was the Cirrus Design Corp. SF50 Vision Jet wearing the American registration marking of N755DS.  It arrived from Bankstown and Ballina/Byron Bay Gateway Airports before it then departed to the Whitsunday Airport at Shute Harbour. 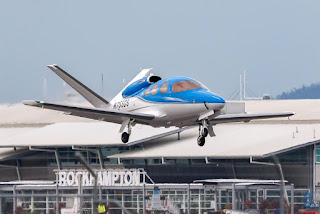 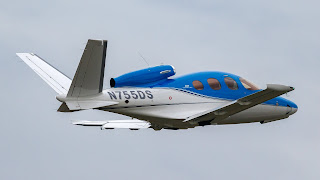 It is assumed that the Vision Jet will be one of the star attractions at this weekend's Fly-in and Runway Dinner events which are being held at the Whitsunday Airport at Shute Harbour over the weekend.
Meanwhile, also on Friday 23 April, several more light General Aviation (GA) aircraft were also noted heading to the Whitsunday Airport at Shute Harbour, however, due to the rather inclement weather affecting the Central and North Queensland coasts in particular, several of the aircraft's travel plans were disrupted with some diverting to nearby Hamilton Island and Proserpine (Whitsunday Coast) Airports, while others remained at enroute ports or cancelled their trips altogether.

Piper Aircraft Corp PA-28-235 Dakota VH-KIF diverted into Rockhampton Airport from Murwillumbah after electing not to continue North due to weather.

UPDATE! On Saturday 24 April, VH-KIF departed Rockhampton Airport for Shute Harbour but yet again returned to Rocky due to weather.

A flight of three plus a straggler - Cirrus SR22 VH-FJD, Cessna 182 VH-YRA and Cirrus SR22 VH-MSI, as well as Amateur Built Van's RV7 VH-XWI - were all noted flying from Winton up to Bowen Airport where they parted.

Vanderfield Pilatus PC-12/47 VH-WPH flew up from Toowoomba to Mackay Airport and then the Whitsunday Airport at Shute Harbour.

Cirrus SR20 VH-LWV flew up from Southport via Gladstone Airport to Shute.

Cirrus SR22 VH-ZGA flew up from the Sunshine Coast to Shute.

UPDATE! On Saturday 24 April, RV6 VH-MEK and locally-based Cessna 210 VH-CSD hopped across from Pandora to Rockhampton Airport before then departing to Shute. Later, VH-MEK arrived back from Shute Harbour before then departing to Caboolture.
Van's RV7 VH-ORF and Cirrus SR22 VH-YMI flew from Archerfield to Shute Proserpine Airport. Cirrus SR22 VH-PAS flew from Gold Coast to Shute Prosie.

UPDATE! On Saturday 24 April, VH-URD departed Rockhampton Airport for Hamilton Island but returned to Rocky due to weather.  It later landed at Proserpine Airport.

UPDATE! On Saturday 24 April, VH-GKF departed to Hamilton Island Airport before later returning to Rocky.
Finally, also on Friday 23 April, Paspaley Pearling Grumman G-73AT Turbo Mallard VH-PPT was noted flying around the Whitsundays and landed at Whitehaven Beach. It later touched down at Proserpine (Whitsunday Coast) Airport and is expected to operate scenic flights from there and Airlie Beach out to the Whitsundays over the next couple of days!
VH-PPT was noted using the radio callsign "Pearling 66".
Photos taken by Steve Vit  ©
Posted by Damian F at 8:08 PM