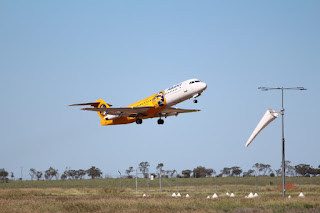 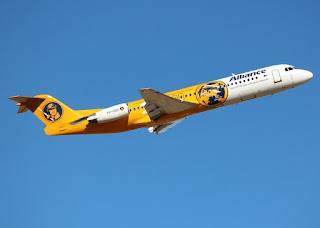 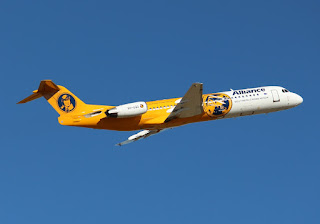 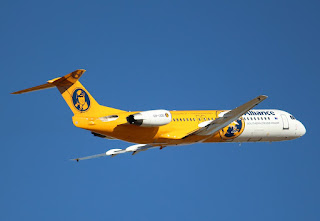 VH-UQG had arrived into Longreach Airport from Cairns on Friday 9 April as UTY558.
As mentioned previously, VH-UQG is painted into a stunning livery by Lila Design in Tilburg, The Netherlands (EU), which honours adventurous Australian aviator Sir Charles Kingsford-Smith.

The VH-UQG registration marking was the registration for Kingsford-Smith’s Avro 616 Avian ‘Southern Cross Minor’ and was assigned to the Fokker aircraft by chance.

VH-UQG celebrates the early years of pioneering aviation and should soon be visiting other major cities and regional towns in CQ and around Australia.
Alliance Airlines Fokker F-70 VH-JFB was also in and out of Longreach Airport also over the weekend, arriving from Brisbane and Winton late on Friday 9 April as UTY550 and departing back to Winton and then Brisbane late on Saturday 10 April as UTY551.
It appears that VH-JFB was operating a closed charter flight in support of Winton's Way Out West Fest which was held at the Waltzing Matilda Centre in Winton over the weekend.
Meanwhile, in other Alliance Airlines news, on Saturday 10 April, their Embraer E-190 jet VH-UYZ operated the aircraft types first ever Regular Passenger Transport (RPT) flight for the airline with it operating for Airnorth from Toowoomba-Wellcamp Airport to Melbourne Airport and Cairns Airport.
VH-UYZ reversed the flights on Sunday 11 April.
Finally, back at Longreach Airport, also on Sunday 11 April, New South Wales-based Beech A36 Bonanza VH-FOG departed to Lightning Ridge after arriving the previous day from Charleville Airport.
While Victoria-based Hawker Beechcraft G58 Baron VH-ZWO landed at Longreach Airport from Ballarat before it later departed to Cairns.
And SFC Farming Raytheon B200 King Air VH-TXT called into Longreach Airport from Mundine.
Photos taken by Greg Weir and Garry Wilkinson  ©
Posted by Damian F at 8:27 PM