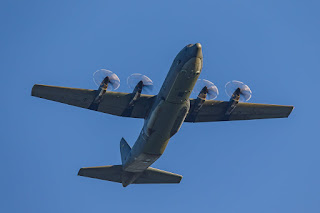 The Herc flew down from Townsville to Hamo before being photographed above completing a VOR approach onto Runway 15 at Rockhampton Airport.  It completed a touch-and-go at Rocky and then continued down to RAAF Base Amberley. 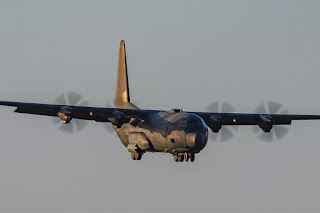 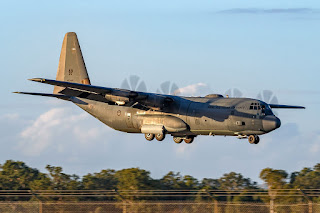 As mentioned below, A97-468 is one of two RAAF C-130J Hercules transport aircraft (the other is A97-446 "Trojan 04") which were both were spotted completing similar training flights in Far North Queensland and then out to Longreach Airport over the last couple of days.  They both arrived from their 'home' at RAAF Base Richmond in New South Wales over the previous weekend.
Another item of interest is that A97-468 is one of the few RAAF C-130J Hercules transport aircraft to be fitted with a satellite communications (SATCOM) system.

Satellite Communications (SATCOM) equipment is spreading across the RAAF’s Hercules transport aircraft under Air Force’s Plan Jericho. SATCOM will deliver the C-130J with a broadband network capability, allowing voice calls as well as exchanging data on secure networks, from anywhere across the globe. This will allow crews and passengers alike to arrive at their destination with live information about their mission.
Sincere thanks to local photographer Steve V for allowing us to share these great photos!
All photos taken by Steve Vit  ©
Posted by Damian F at 8:01 PM