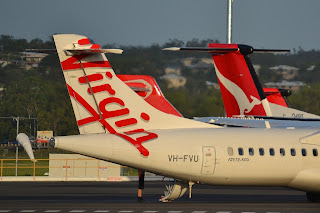 Each of these aircraft were captured by Jamie as they departed Gladstone for Brisbane.

Also spotted earlier on Wednesday 13 March was Shadforth's Civil Engineering Contractors Cessna 414A VH-SMX.  This aircraft is a very familiar visitor to Gladstone Airport, and on this occasion, VH-SMX was visiting for the day from the Sunshine Coast. 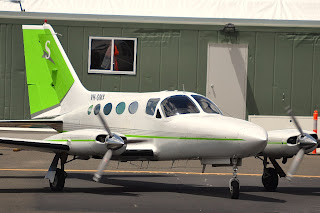 On Thursday 14 March, Virgin ATR 72-500 VH-FVU was back at Gladstone, and Jamie managed to capture some lovely images, giving us a closer look at the ATR. 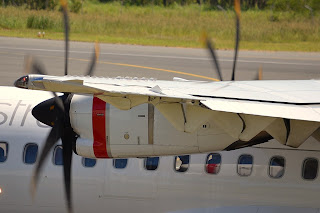 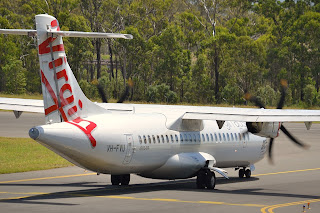 Jamie also spotted Bell 206 helicopter VH-SWI.  This chopper is usually based at Mackay with the Whitsunday Helicopter Group, although it has also been seen at Rockhampton during the week.

Also a frequent visitor to Central Queensland is Cessna 402B VH-RLX, which is registered to Papam Pty Ltd in Brisbane.

Lastly, the General Aviation aircraft parking area is also becoming quite busy at Gladstone Airport, with parking on the tarmac becoming a little scarce.  The Gladstone Flying Training & Air Charter RA-Aus aircraft - Aeroprakt A22 Foxbat 24-4270 and Jabiru J-230 24-7347 can be seen. In the background, the new Careflight temporary hangar and building facilities can also be seen on GA Apron.

Thanks to Jamie C for the great photos and report!