Quite A Few Bizjet Movements Around Central Queensland Airports This Week

It's been a really busy couple of weeks with a very wide variety of bizjets that have called into various Central Queensland Airports.  No doubt the highlight was the arrival of Canadair CL-600-2B16 Challenger 605 bizjet N15VC into Hamilton Island Airport from Sydney on Wednesday 13 March.  On Friday 15 March, N15VC departed for the Gold Coast, where Kyle M of the Gold Coast Aviation Blog (LINK) caught it while on finals to Runway 14. 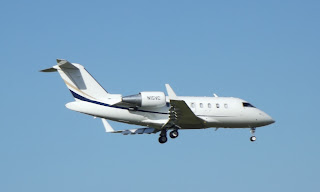 Lastly, the President of the Republic of Mozambique, Armando Guebuza, visited Mackay on Tuesday 12 March.  It was thought that he travelled North in Royal Australian Air Force (RAAF) Boeing B737-7DT(BBJ) A36-001, which was noted flying as "Envoy 23".

Other bizjet movements around Central Queensland were confined to a wide selection of Australian-based corporate aircraft.

Also on Wednesday 13 March, Rockhampton Plane Spotter 'IAD' caught a pair of visiting Singapore Flying College Cessna 510 Citation Mustang bizjets as they flew through Rockhampton from Mackay and South to the Sunshine Coast.  VH-SQJ (pictured below) flew as "Raffles 143", while VH-VSQ flew as "Raffles 54". 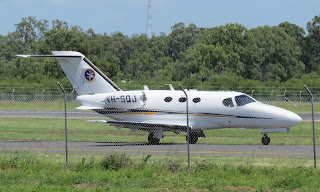 During the previous (and much quieter) week, Light Jets Australia of Toowoomba-operated Cessna 525 Citation CJ1 VH-TFW was noted arriving into Longreach from Winton on Thursday 7 March.  On Friday 8 March, VH-TFW departed Longreach for Barcaldine and the Sunshine Coast.

The Queensland Government (State of Queensland) VH-SGY was yet again spotted in Central Queensland, with it noted arriving into Gladstone from Brisbane on Thursday 7 March.

On Monday 6 March, Balmoral Air Dassault Falcon 2000EX VH-WIO arrived into Hamilton Island from Bankstown and Brisbane.  After staying overnight it departed back to Bankstown.