Skytrans Airlines latest Dash-8-100 to join its fleet - VH-QQD - made its first visit to Clermont Aerodrome on Monday 25 March, touching down SKP872 from the Sunshine Coast.  After overnighting, VH-QQD - which is the second Dash-8-100 in the Skytrans fleet to wear this registration - departed back to the Sunshine Coast as SKP877 early on Tuesday 26 March. 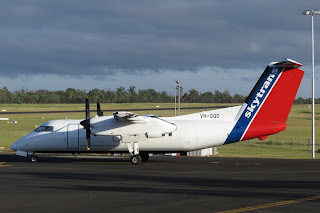 VH-QQD (2) was delivered to Cairns in October 2012, wearing full GMG Airlines colours (from Bangladesh), along with the Bangladeshi registration of S2-AAA.  I managed to catch VH-QQD in Cairns in December 2012 as it was still being prepared to enter service with Skytrans, still wearing its GMG Airlines colours.  It was since repainted in Townsville, and entered service with Skytrans in Cairns in January 2013. 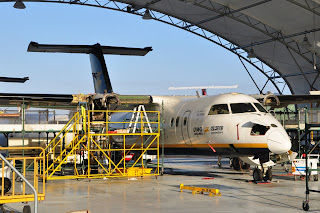 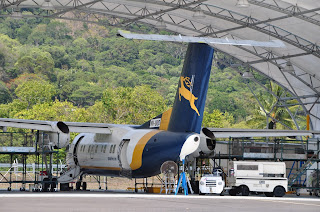 VH-QQD was one of three Skytrans Dash-8s noted at Clermont Aerodrome on Tuesday 26 March operating the 6-7 times weekly return Fly-in Fly-out (FIFO) charters from Clermont to the Sunshine Coast and Brisbane.  Spotted along with VH-QQD were Dash-8-300s VH-QQM and VH-QQP. 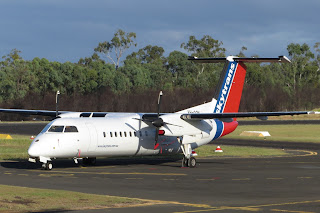 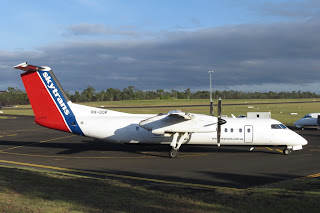 It's great to finally be able to report on something 'interesting' happening at my local 'drome!
Posted by Damian F at 3:30 PM