Some More Jet Spotting at Gladstone Airport on Friday

After our special post featuring some fantastic photos by Jamie C of both QantasLink (Cobham Aviation) and Virgin Australia jets operating into Gladstone Airport (below) comes some more great photos of more jet action at Gladstone Airport on Friday 15 March.

QantasLink (Cobham Aviation) Boeing B717-200 VH-NXJ was spotted departing for Brisbane as QJE1705.

Shortly after Virgin Australia Embraer E-190 VH-ZPG was photographed by Jamie as it also departed to Brisbane but as VOZ1714. It had earlier arrived from Brisbane as VOZ1711. 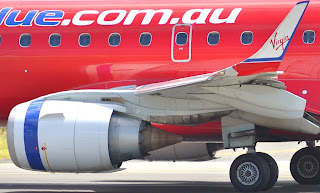 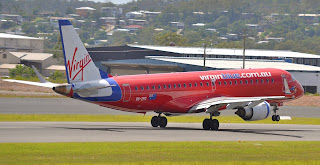 Later, another Boeing B717-200 VH-NXE was spotted also operating for QantasLink into Gladstone from Brisbane but as QJE1707.

After parking on the grass - due to a shortage of space on the General Aviation apron - Par Avion / Bayswater Road Aerial Surveys Pilatus Britten-Norman BN2A-26 Islander VH-RQW was spotted departing.

Another aerial survey aircraft in the form of Fugro Spatial Solutions Cessna 404 VH-WGS was photographed by Jamie as it departed Gladstone for Emerald.

Another familiar Gladstone-based helicopter spotted was Australian Helicopters Aerospatiale AS.350BA VH-HQO as it returned from a flight to Heron Island.

Australian Helicopters operates regular daily returns flight transfers to and from Heron Island out of their Gladstone Airport base.

Lastly, a great photo of Robinson R-22 VH-ZOF - which is operated by Stock Air Helicopters at Marlborough - as it came in for landing at Gladstone. 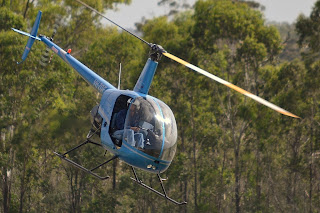 Thanks to Jamie C for his contribution of yet more fanatics photos!