Mackay Airport was a busy place on Thursday 28 February as three local bizjets were believed to be on the ground during the day.  First, Raytheon 390 Premier 1 bizjet N7088S, is still at Mackay, having arrived on Monday 25 February.

Visiting on Thursday though were a nice pair of Cessna Citation bizjets. The first to arrive was Skypac Aviation Cessna 550 Citation II bizjet VH-FYP. VH-FYP flew from Cessnock to Brisbane and then on to Mackay.  It later returned to Cessnock via Brisbane.

The other Cessna Citation bizjet was Business Aviation Solutions Cessna 650 Citation VII VH-LYM, which flew from Armidale to Brisbane and then on to Mackay. It departed back to Armidale via Brisbane.

Another Cessna Citation bizjet that is becoming a regular to Central Queensland is Aeromil Pacific Cessna 560 Citation Ultra VH-SJP which arrived into Emerald Airport on Wednesday 27 February from the Sunshine Coast.  After staying overnight, VH-SJP departed back to the Sunshine Coast on Thursday 28 February. 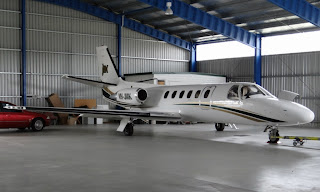 Meanwhile, also at Rockhampton Airport, but on Tuesday 26 February, local plane spotter 'IAD' caught Royal Australian Air Force Beech B350 Supper King Air A32-670 as it touched down from the North. 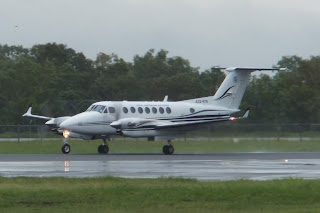 There was also a lot speculation that with the Federal Opposition leader in town this week that a RAAF corporate jet would visit Rockhampton.  However, as far as we know, this didn't happen - be must have driven in!
Posted by Damian F at 10:45 AM